My first car was a Mini. Not a BMW Mini such as half the world seems to want to drive these days (personally I would prefer a new styled VW Beetle, even though I do know it is simply a Golf with a different body). No, my first car was what is now known as a Classic Mini. I loved that car; it gave me my freedom.

Beneath the dirt (I don’t recall ever washing it) and rust (it had a lot of rust) it was a sort of mustard yellow colour. I inherited it from my sister when she upgraded to a Ford Fiesta (I eventually inherited that from her too). I covered my car in stickers that advised those behind me to ‘Back off, I’ve got a sensitive bottom’ or ‘Who says you can’t have everything? Here I am’. The rear and side windows displayed such information on their many stickers as ‘Sex Appeal, please give generously’ and the much derided ‘My other car is a Porsche’.

I was given all of these stickers by friends and attached whatever was offered (which was probably why I was given a few; as a challenge to see if I would dare display them in our conservative neighbourhood). The pièce de résistance, however, was the blue sun strip that ran across the top of the windscreen and proudly declared the car to be ‘Hot Rod’. And it was.

Thanks to some clever tuning work by a friend (and a friend of this friend, who enjoyed rallying) the engine, when it went, went like the clappers. Back in the day the VW Golf was the car to have and my little Mini could outgun one from a standing start (I did this at lights just to annoy the drivers who thought they were so cool). My car had a top speed of 80mph, as measured by a police speed radar on the Outer Ring Road at Knock in Belfast. How I managed to sweet talk my way out of that one I don’t know. A nineteen year old’s seemingly innocent smile and feminine charms can work wonders when needed.

Did I mention the rust? If my front seat passenger lifted the soggy carpet there was a fine view of the road. This was sorted by my friend who rivet gunned a sheet of metal over the offending area. The carpet dried out eventually and the car smelt much better after that.

This was not the only leak the car could boast though. The radiator leaked and the brake pipes leaked (I learnt to pump the brake pedal when I needed to stop). The electrics were also dodgy, particularly when it rained. I wrapped tinfoil over the front grill and sticky tape around the distributor. If the engine cut out in heavy traffic a spray of WD40 would normally get it going again.

In the boot of the car I carried brake fluid, a gallon of water and a tow rope – all a girl could need in the event of breakdown. When the exhaust system fell off I went back to collect it and drove noisily round to my friend’s house to have it reattached. To get the car through it’s MOT I borrowed a set of tyres that had more tread than mine and sent it to a garage with a sympathetic mechanic. I never really knew how much an MOT was supposed to cost.

Driving a car such as this meant that I was never intimidated on the busy, city roads. When a smug, besuited, middle aged driver in a sleek, shiny jaguar tried to push into my lane I just kept going. If he wished to risk a scratch on his bodywork trying to get me to move out of his way then let him; bodywork scratches were the least of my worries. It was a bit embarrassing when, having forced him to give way, the Hot Rod then conked out in the busy stop, start traffic. Luckily I had that gallon of water to top up the radiator and get going again. I gave the drivers behind my best smile but I’m not sure it was appreciated.

I would have continued to drive this amazing machine for longer if a taxi driver hadn’t slammed into the side of my beloved car trying to do an unexpected u turn. He took me to court to try to pin the blame on me but lost. During this time I drove around with a polythene sheet where the passenger side windows had been (visibility was a bit of an issue but I coped) and the door attached to the car with string. Eventually my friend got me a replacement door, nearly the same colour as the rest of the car. With the help of a tractor and chain he pulled the car into shape and managed to get the door to fit pretty well. I had to remember which key opened which door but felt well sorted with this arrangement.

Unfortunately the accident drew the attention of my insurance company who declared my little car a write off. The assessor pointed out the dodgy brakes and treadless tyres but it was the potential damage to the chassis that made him refuse to reinsure. I was devastated.

Recovery was, however, speedy. Not only did I get money from the insurance company (lucky that I was on the winning side of that court case), but another friend found a farmer who was willing to take my broken car and do it up for his daughter. He even paid me for it.

After a few drinks to celebrate I put the accumulated cash aside for my second car. This ended up being another mustard coloured Mini with dodgy brakes, purchased from a couple of guys who did up and sold on such cars. I heard a few years later that the police were prosecuting them for selling unroadworthy vehicles to unsuspecting customers. For the money I had paid, I expected nothing less. 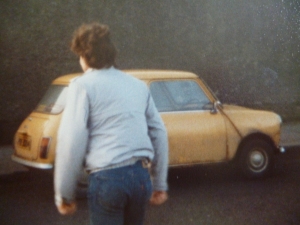 Thanks to The Waiting for the inspiration for this post. Sorry I missed the relevant Blog Hop.

3 comments on “The Hot Rod”