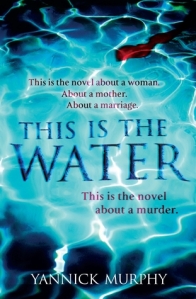 This is the Water, by Yannick Murphy, is written in an unusual, stylised prose that distances the reader from the action whilst, at the same time, putting them inside the head of key characters. Reading the book I felt as though I were observing the lives described with the detachment of an outsider who is a part of a social group without a sense of truly belonging. The writing offered observation more than emotion, although feelings were astutely described. The approach taken presented a cast of characters who seemed unable to empathise with each other, so caught up were they in their own issues.

The story centres around an American youth swim team and the dedicated parents who support their offspring in this demanding activity, often with vicarious motives. One of the team is murdered in a vicious and bloody attack, which is linked to a series of previous murders that have happened in the locality over decades. Various parents in the group have links to the murders, and their desire to protect their comfortable lives plays out alongside feelings of guilt over how they have acted and the secrets that they are keeping.

The book explores the thoughts and feelings of the middle aged parents more than the members of the swim team. The murders provide a tension in the plot, but the main storyline is about changes in close relationships over time and how different personalities cope. The author depicts varying attitudes to ageing with a candid honesty that shines a harsh light on those who would still like to be seen as attractive, to be desired.

The characters each carry emotional baggage, but the reader is shown how new challenges can supersede what had previously felt overwhelming, allowing the sufferer to cope better with those problems. Having watched key characters behave foolishly (although all too believably) as the tale progressed, the denouement offered hope that such actions were ultimately unimportant when crises force drifting families to support those they truly care for rather than continuing to live their lives for personal gratification.

I found the conclusion of the murders a little too tidy, but the wrap up of the various relationships was satisfying. Having read through a story written in such an unusual style, I liked the way the reason for this approach was explained.

I suspect that this book will have its detractors purely due to the cadence of the writing; I enjoyed reading the tale for its critique on human nature. It is observant and believable, a warning of the damage that can be caused when life is allowed to become too self centred, and the challenge of living an ordinary life in any other way.

My copy of this book was provided gratis by the publisher, Headline.