I am so pleased to be taking part today in the Waiting for Doggo Blog Tour. I love Doggo. He is described in his book as an ugly looking dog but it is his personality that shines through, his wonderfully insouciant dogginess.

His book is actually about his reluctant owner, Dan, who is left with Doggo when Clara, Dan’s girlfriend, leaves them. Doggo is the star of the book though and they should absolutely make a film about him.

For this post the author of ‘Waiting for Doggo’, Mark Mills, was asked to name his top five dogs in films. This is the list that he provided.

Uggie the Jack Russell stole the show and won a Palm Dog Award at the Cannes Film Festival for his performance.

Detective Turner (played by Tom Hanks) finds himself lumbered with a giant, slobbery Dogue de Bordeaux, when it becomes clear that Hooch is the witness to a murder.

Star of twenty-seven Hollywood films and a long-running TV series, ‘Rinty’ the intrepid German Shepherd is an American legend.

Marley, a delinquent Labrador, wreaks havoc in the lives of two journalists.

Adapted from the novel by Louis de Bernières but based on a true story, Red Dog is a nomadic Australian Kelpie who insinuates his way into the hearts of an Outback community.

So there you have it, five dogs that could give Doggo a run for his money, if he could be bothered to leave the sofa, the sofa that he is not supposed to go on.

‘Waiting for Doggo’ is published by Headline and is available to buy now. Go on, you know you want to. 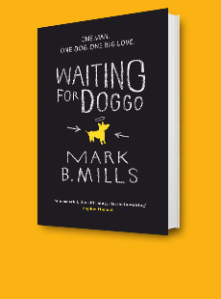 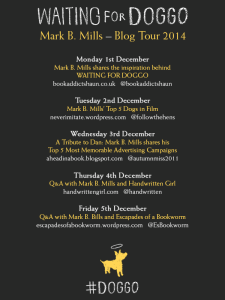