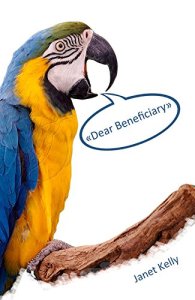 Dear Beneficiary, by Janet Kelly, is a modern farce about a woman of a certain age. The protagonist, Cynthia, had been ‘diligently married’ for forty years and is now rather enjoying widowhood. A brief affair with a much younger Nigerian man showed her that sex could be enjoyed, a revelation to this very proper housewife from Surrey. Although she was saddened when he had to return to his home country it was also something of a relief as keeping him a secret from her family had been tricky at times, once involving several hours spent in a wardrobe.

She decided that to engage in modern life she should get on line so turned to her grandson for help. Excited by ‘the prospect of his certainly solvent if not well-off relative being encouraged to buy the latest technology’ she soon found herself the owner of a top of the range PC and smart phone, neither of which she could operate.

Almost immediately she is taken in by a Nigerian 419 scam which empties her bank account. Convinced that the money has been used legitimately by her former lover she ignores her bank manager’s attempts to help and decides to travel to Lagos to sort the matter out for herself, with unfortunate results.

The strength of this story lies in the author’s ability to show Cynthia’s many sides.

In some ways she is the foolish old woman that her family see her as with her inability to drive safely or operate technology but a stubborn refusal to recognise her limitations. She understands how she is seen by her children so often chooses not to tell them what is happening in her life.

She is vain and arrogant, expressing disdain for those her own age with their hobbies and sagging bodies. She is happy to believe her hairdresser when she exclaims at how young Cynthia looks, feeling smug about her skincare routine and regular swims. She preens herself and seeks compliments, feeling annoyed when others regard her as old.

Despite her aging, middle class conceits Cynthia is still an individual and wishes to make use of her remaining years. Having escaped the dullness of her married life and discovered that sex can be enjoyed she wishes to seek out lovers, accepting advances as the starving may accept food.

Cynthia is determined not to grow old without a fight and this determination comes to the fore when, in the direst of circumstances, she is required to plan a daring escape. Convinced of her own superiority she is surprised to discover that her companion, who she regards as brash and vulgar, has her own hidden strengths. Together they form an unlikely alliance.

The characterisations in this book are amusing with enough wit and wisdom to entertain. Ludicrous though some of the situations seem (as they should in a farce) I suspect that readers may be inspired to consider their aging relatives and friends anew.

My copy of this book was provided gratis by the author.