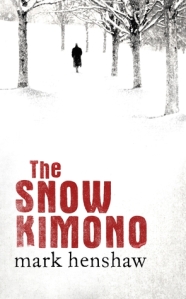 The Snow Kimono, by Mark Henshaw, was described by the Sydney Morning Herald as ‘a thriller of the intellect.’ That being the case I suspect that I am not intellectual enough to appreciate the nuances of plot and complexities of interwoven character development. Put simply, I finished this book without understanding what the author was trying to say.

There are two main threads to the tale. First we have the Japanese story which revolves around Katsuo Ikeda, an apparently brilliant young author who also happens to be a narcissist and possible sociopath.

“he seemed to suck the light out of things”

His story is told during conversations held in a Paris apartment between his old friend, Tadashi Omura, and Auguste Jovert, a recently retired Inspector of Police who has his own story to tell.

This second tale forms the parallel thread. In his younger days Auguste worked in Algiers where he lived a double life as an undercover government operative. I found this strand particularly confusing. I did not pick up on how he ended up as Inspector of Police in Paris.

I harboured an expectation that at some point the stories would merge, or at least exhibit some similarities. If this happened then I missed it. Both men had difficult upbringings, numerous relationships and distanced children but these are hardly unusual life events. Their stories seemed to be building to more. The tangled threads contained many knots which I struggled to undo.

I suspect that one of the reasons for my confusion was the proliferation of unfamiliar names. I lost track of exactly who the many women with whom Katsuo became involved were. Likewise, the Algerian women became muddled together in my mind. To me this book resembled a mathematical puzzle that required note taking and relationship maps to enable the reader to keep track and understand key events. I could not simply read and enjoy.

The first chapter failed to grab my attention but by the end of the second chapter I was appreciating the quality of the writing, the imagery and the potential for a mystery to be developed and solved. That I got to the end without understanding left me feeling dissatisfied. Elements were explained, the Mariko, Sachiko, Fumiko strand being the most straightforward. The links between Auguste’s numerous relationships remained unclear.

That this book did not work for me need not mean that it will not work for other readers. The language, structure and phrasing are nicely done but, for this reader, the raison d’être remained obfuscated.