Little Black Lies, by Sharon Bolton, is disturbing, riveting, haunting. Set in the Falkland Islands a decade after the Argentinian invasion of 1982, it tells the tale of a close knit community brought to the brink by a series of child disappearances. Themes of grief, trust and the lies people tell to protect themselves are explored. How well can one person truly know another?

Catrin and Rachel have been best friends since childhood; that is, until Catrin’s two sons are killed whilst in Rachel’s care. Their deaths devastate them both. Three years later all Catrin can think of is revenge. Rachel is fighting her own demons in the form of crippling depression.

As Catrin considers the methods by which she may make her former friend suffer the most, a visiting child to the islands goes missing, the third in just a few years. The community mobilises to search for the little boy believing that he must have wandered off from his family. Few are willing to consider that he may have been taken. When a small community has grown up together, lived in close proximity, sometimes for generations, it is hard to accept that one of their own could act in such a heinous way.

What follows is a series of events which lay bare the individual secrets that are being harboured by so many. In the space of a few days accepted weaknesses become threats, causality is assumed and sides are taken. Actions that would previously have been understood as a necessary part of life on the islands are cited as proof of inhumanity.

The writing is dark and menacing. The isolation of the location along with the potential danger from natural phenomena on land and at sea are used to good effect. The reader feels the threats but cannot be sure of their source.

Woven into the mix is the plethora of damaged people who have all managed to present acceptable fronts to society. The grieving mother holds down a good job; the former soldier with PTSD is well liked; few realise how much Rachel is being hurt by her apparently supportive parents. What would normally go politely unremarked becomes reason to distrust.

The tale is filled with small town secrets and petty lies. These are not, however, what the story is about. At its heart is the darkness and isolation that can be created when a community turns on its own, how quickly trust can turn to hatred when those who belonged become ‘othered’.

I did not guess the denouement and found it most shocking of all; not because of who it was but that it appeared the secret was to be kept. I will be haunted by that thought. How far would those we know go to protect their loved ones?

I finished this book in a day. It got under my skin and I could not put it down. I envy those who have not read it the treat they have in store.

My copy of this book was provided gratis by the publisher, Bantam Press.

This review is part of the Little Black Lies blog tour. 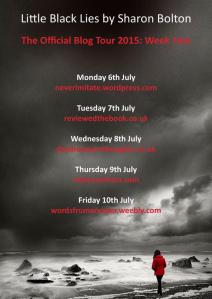