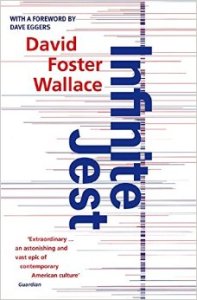 Infinite Jest, by David Foster Wallace, is one of the few books that has defeated me. I acquired it in the days before my TBR pile became a mountain having noted its recurring presence on the many ‘best books’ lists that appear on line. I found reviews and star ratings which promised depth and satisfaction for the discerning reader. I turned to the first page, confident of the enjoyment to come. I was disappointed.

The prose is turgid. Ploughing through the many, many words I found occasional glimmers of plot but these were few and far between. The characters were overdone; none of them believable even in this make believe world. There were words and then more words, pointlessly strung together getting nowhere.

As I read on I found myself noticing dust on furniture; I would do the ironing rather than pick up this book. It sat by my chair challenging me, laughing in the face of my determination to find the promised qualities that eluded me. I would read a page, then another before finding anything else to do.

I reached page 105 and here my bookmark has remained. I intended to return but life is too short to waste on pretentious sophistry. Whatever other reviewers had found was not there for me.

I mentioned to a friend, an English graduate from Cambridge and a professional critic, that I had managed to wade through so little of this book before grinding to an exhausted halt. He expressed surprise that I had got as far as I did.