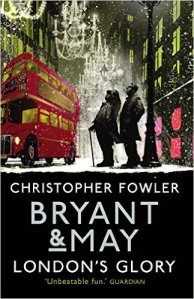 London’s Glory, by Christopher Fowler, is a collection of short stories featuring the fictional detectives, Bryant and May. There are eleven stories in all, ten of them original to this book. These are sandwiched between additional content which is as interesting as the stories themselves.

The book opens with an introduction by the author, discussing the enduring appeal of crime fiction. He mentions writers who have inspired him. Amongst the well known names are several who wrote prolifically and were popular in their day but have since been largely forgotten. I enjoyed his musings on the current desire for realism in the genre, despite the fact that murder rates are falling and most murderers are not particularly bright. He points out that the subtle clues and clever planning which add depth to a good crime novel are the real fiction, and that much of what seems unbelievable to the reader may well be based on an author’s experience or forgotten facts.

Each of the stories opens with an additional, short introduction highlighting the inspiration for that particular case. Although they work standalone, many of these cases have been mentioned in previous works – there are currently twelve Bryant and May novels – making them a treasure trove for the duo’s many fans.

Bryant and May stories have an old fashioned feel. The author admits to playing with types: a locked room mystery; a country house murder; precinct stories. In solving cases from the clues to hand, their import only revealed at the denouement, the works of Conan Doyle and Christie come to mind.

The tales are written with a playfulness (it is not often that a work of crime fiction has me laughing out loud) which, interspersed with the random facts about the environments in which the detectives work, adds to the sense of fun. When some of the action appears ludicrous, coincidences hard to believe, an aside will be thrown in that these cases are taken from Bryant’s memoirs so a little embellishment is to be expected. As any good pub raconteur will know, insistence on too much realism can detract from a good story. By making his detectives work in the Peculiar Crimes Unit the author has granted himself freedom from run of the mill.

The book concludes with a potted history of the twelve Bryant and May novels already published, the cases they cover and their inspiration. The background provided in all the additional content gives this book a personal feel, a gift from author to reader, and provides an insight into how these detectives were brought to life.

A must for existing fans, a taster for the uninitiated, or a brief study in crime fiction writing, this book is an enjoyable book to read; as quirky as the detectives it contains. I suspect that it also contains a few teasers for future works but, as with the clues to any decent whodunnit, readers can only guess at their significance until the reveal.