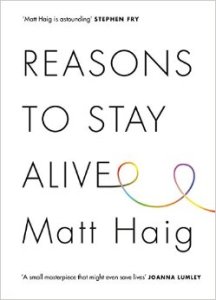 Reasons to Stay Alive, by Matt Haig, chronicles the author’s experience of crippling anxiety and depression, and how he emerged from his worst period of disintegration changed but better equipped to cope with these debilitating conditions when they recur. Although he had the good fortune to have a loving partner and family to support him throughout, the feelings he shares and the advice he gives are sound even for those who do not have such privileges. He acknowledges their worth but still had to deal with this himself.

Starting with the onset of his illness, in Ibiza in 1999, he takes the reader through why he did not commit suicide but instead went back to his parents’ home in Nottinghamshire where he was barely capable of leaving the house for months. He talks of how others view the depressed, and how the sufferer views himself. There is the fear of madness, the monstrous scenarios imagined and how real they feel, the slowness of time as he battled to get through each hour of each day.

The author did not find that medication helped but gradually built up an arsenal of weapons to enable him to fight in a way that better suited him. He eschewed all drugs, including alcohol. He took up running, yoga and meditation. He read voraciously and started to write. He gradually faced his demons, sometimes retreating but then returning a little stronger to try again.

Although this is a dark and difficult subject it is presented in a way that gives hope. He survived. He can now see that the worst periods do end and that there is the possibility of good times in a future that itself once appeared an impossibility.

“Depression is also… Smaller than you. Always, it is smaller than you, even when it feels vast. It operates within you, you do not operate within it.”

In looking back he believes that he is richer for the experience, however high the toll of his suffering. What he describes as his thin skin enables him to feel the good in life as well as the bad. He appreciates what he has and knows that, when the black feelings return they will pass.

Mental illness is prevalent yet still carries stigma. Books such as this serve to remind sufferers that they are not alone, that many have suffered and gone on to live lives containing many worthwhile moments. It suggests things that may help but more than that it reminds us that all things must end, that we should sip and savour the bottle of wine that is our allotted time.

“We are alone, but not alone. We are trapped by time, but also infinite. Made of flesh, but also stars.”

Highly recommended to anyone who suffers mental illness or who knows a sufferer. I suspect that covers just about everyone.