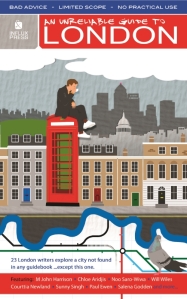 ‘An Unreliable Guide to London’ is an anthology of twenty-three short stories set in the lesser known parts of our capital city. It is an exploration of the impact of nostalgia, resentments and a desire for recognition. It entreats the reader to observe what is and was, to reflect on all that is happening around them, wherever they may be.

Cities exist in a state of flux, continuous change which many resist. Even long term residents are transients, memory subject to interpretation. A city is an aggregation of human intentions and endeavour, at the whim of decisions causing repurcussions which are rarely appreciated at the time.

These stories tell of places that existed for a moment, told not by historians but by those who experienced them. So much happens that goes unseen, although ambience may be remembered and reminisced over. It is this which, when lost, may be craved.

The anthology is divided into four geographical areas, the tales reflections on time and place. I have picked out those from each section which particularly resonated.

‘In Pursuit of the Swan at Brentford Ait‘, by Eley Williams, tells of a man who has given over his life to the research of cryptids, in particular the existence of a huge swan that legend claims exists on an uninhabited island in the River Thames. The zeal with which the protagonist pursues his hobby provides humour alongside the history. The asides regarding his wife are glorious.

‘Staples Corner (and how we can know it)’, by Gary Budden, tells of the nightmare that is the modern shopping experience. Cavernous warehouse type emporiums, staffed by uniformed sales assistants sticking remorselessly to a script designed to maximise each customer spend suck all potential pleasure from the making of a purchase. The dispiriting experience of a young couple in need of a new laptop is portrayed with dark humour.

‘Mother Black Cap’s Revenge’, by George F., reveals the inverted snobbery of those who choose to live on the edges of society. Their spaces have been shut down, taken over and gentrified. Alternative venues, newly created, are invaded by those they regard as sub-culture tourists. These interlopers are treated with disdain.

‘The Camden Blood Thieves’, by Saleena Godden, tells of a writer who regards her life as one of romantic solitude. During a drunken night out this becomes unbearable. She meets men in pubs, visits a club and hangs out on the streets around Camden. She feels witty and believes she is having fun. As she continues to drink, her various experiences merge and overlap. It is unclear what is real, what is distorted memory or a drunken dream. How much of life is an interpretation?

‘Notes on London’s Housing Crisis’, by Will Wiles, takes the reader to an alternative reality where housing is treated much like a car purchase. Low cost living pods slotted into purpose built structures may be upgraded; neighbouring pods added for expansion. It is designed to be flexible, affordable and upgradable; yet this fabulous idea is floundering due to individual’s greed and a lack of central investment. However impressive the potential of an idea, it seems that man can always find a way to degrade it.

‘Soft on the Inside’, by Noo Sao-Wiwa, is set in a taxidermy shop. It opines that:

“Stuffing the dead is an interesting concept […] an ordinary cadavar on public show is considered f**ked up on all levels. Animals bodies, on the other hand, are considered fair game.”

Many of the animals’ bodies were provided by a game hunter:

“Galloway was a trophy hunter, a turd of a human being who loved animals in all the wrong ways […] it was the thrill of the kill that got him going; each gunshot was like an ejaculation.”

When the animals are given twelve hours of life, they seek revenge on their killer.

‘Rose’s Woolwich’, by Paul Ewen, is a masterpiece of humour and irony. Set in a traditional pub on a Friday lunchtime it is gently mocking of the clientelle, even if their reaction to the Francis Plug like customer was entirely understandable. The lizard metaphor is fabulous.

‘In the Vauxhall Pleasure Gardens’, by Sunny Singh, is a poignant, beautiful, love story about a bachelor nearing retirement. It pulled at my heart. The denouement was perfect.

‘Nightingale Lane’, by Stephanie Victoire, offers up sylphs, the spirit of a place that can remain in hidden corners despite transcience and change. They may be found by those who seek them out, forged by their past, present and future.

“we will always be here should you return. We keep all stories for all time; just remember how we taught you to see them, hear them and feel them.”

‘Thy Kingdom Come’, by Koye Oyedeji, explores how our personal histories may be stolen from under us by other’s recollections. A graffitied tower block with drug riddled stairwells may be reinvented, an improvement if only for notoriety. A bunch of insignificant boys become gangs with power, the current crop of wanabees looking on with wide eyed respect as tales are told of daring do by masters of embellishment.

“Emcee has a small army of young men who will follow him without question. He feeds their need to remain relevent, quenching their thirst for representation.”

‘Heavy Manners’, by Tim Wells, takes the reader through a Saturday spent in a record shop back in the day. It talks of the anticipation, exhileration and thrill of new music.

“Country and reggae both spring from the struggles of working people. Even in the more divided 70s and 80s there was some harmony on the record shelves. Leave people to get on with it and there usually is.”

As with many of the stories in this collection, there is disdain for the here and now.

‘Tayyabs’ by Nikesh Shukla, mocks hipsters (almost too easy a trope) whilst exploring individuals’ sense of self worth. In every walk of life, it seems, there is a bartering of what is valued whilst jockeying for position.

‘Warm and Toasty’, by Yvette Edwards, is a story of kindness. After the intensity of so many of the previous tales this quenched a thirst.

‘There is Something Very Wrong with Leyton Mills Retail Park’, by Gareth E. Rees, contains some brilliantly funny observations on the fictions played out in modern life, where shop fronts are painted onto vacant units and giant ASDA people with perfect skin and hair leap over invisible objects.

“Hung on the wall next to the boy is a banner advert for air freshener: Smell the Scents of Autumn. Not the odours. It puzzles me. The artificial smell of autumn they’ve created will rid us of the odours we smell in the actual autumn? Is that the idea?”

‘Filamo’, by Irenosen Okojie was beyond my comprehension but brought to mind the Freudian musings in ‘The White Hotel’ by D.M. Thomas. I didn’t really get that story either.

This collection offers London life from so many angles and viewpoints. It concludes with a few paragraphs on each of the authors, and asks them to name a favourite ‘off piste’ location in the city. Mine would be St George’s Gardens, a small eighteenth century cemetary near Bloomsbury.  There is something soothing about sitting amongst those peacefully resting souls, whose lives will have been anything but, just like ours.

Introducing the reader to a variety of Londoners, their aspirations and irritations, enables empathy with those whose lives and choices we may struggle to comprehend. This is London, inglorious yet profound. Such people and places are everywhere.

My copy of this book was provided gratis by the publisher, Influx Press.