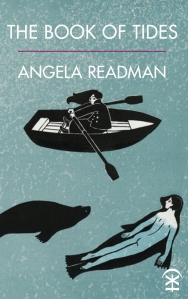 The Book of Tides, by Angela Readman, is a collection of 52 poems featuring a wealth of lyrical imagery conjured from resonant words. The poems explore, among other things, familial and marital relationships – love, loneliness, and the inevitability of loss. Many link to a theme of the sea making the beautiful cover an apt choice.

The complex, emotive push and pull between mothers and daughters crops up in several of the works.

“Let me be a disposable tissue, rolling in the wind, carrying my mother’s tears to the gulley.”

From ‘Hallelujah for 50ft Women’:

“Hallelujah to lasses who got too big for their boots, and stepped outside the fitting rooms of their Mother’s eyes.”

In ‘Backendish’ a daughter watches as her mother sews, “the rag bag spilling […] previous lives on the rug”

Fathers are both loved and feared.

In ‘The Tattooist’s Daughter’ a 14 year old girl feels compelled to sacrifice her skin to her father’s art. Although she makes the offering, it feels like abuse.

In ‘The Honey Jar’ a father is remembered following his death:

“I open my mouth and let a viscous rain of things I’d forgotten fall.”

Some of the poems I simply loved whole – ‘Woman and Rat’, ‘Against Youth’, ‘Fiddling the Gas’. Many offered a wry, contemporary humour.

Others were more ethereal with particular lines piercing my emotions.

From ‘The Book of Tides’:

From ‘The Morning of La Llorona’:

“a waterfall, ready to pour whoever I thought I was into your arms”

There are poems exploring experiences of sex.

From ‘The Herring Lass and the Soap’:

“The school of him slipped over me”

“I can’t get naked without gutting myself”

On lost love I was particularly moved by the sadness of ‘The Sound of a Knot Being Untied’.

Although affecting there is nothing mawkish about the collection, rather each poem grasps the essence of the situation it evokes. The offerings roll through myths and the cruelties of nature but are grounded in humanity.

Varied and individually noteworthy, I was not surprised to learn that several of the works included have already won awards.

Read slowly and savour. This is a literary feast.

My copy of this book was provided gratis by the publisher, Nine Arches Press.

5 comments on “Book Review: The Book of Tides”