I have visited two Memorial Sites to the Nazi death camps – Dachau and Sachsenhausen. Both had a profound impact on me. This is as it should be. If we are to learn from history, to prevent a repeat of such atrocities, we must both remember and reflect on how they were allowed to happen.

But what if memory damages the lives of not just those who experienced such evil but also their descendents? In her debut novel, Starlings (which I review here), my guest today, Miranda Gold, writes of a young woman whose life is stymied by her family’s struggle to cope with the effects of the Nazi holocaust. Although a work of fiction it is based on the author’s personal family history. In this guest post she shares with us how fact can inspire fiction, and how memory is often woven from both.

I was twelve that summer my parents took my brother and me to The Holocaust Memorial Museum. We didn’t need a prologue on the Amtrak from Boston to Washington D.C.; the narrative of my grandfather’s flight from Nazi Germany had underpinned our lives. Though ‘narrative’ is misleading – as though the story was singular and had a tidy, linear arc. Instead there were fragments that assembled themselves into a patchwork, something we’d only begin to see in retrospect, something I’m still trying to understand. I was given snatches sitting by my mother’s bed on the days when she wouldn’t get up – she’d ask me to stay with her, saying she was frightened of being alone. Or, some nights, a sudden burst about her father, the parents he’d left behind, a picture of the stripped bodies and the laughing SS engraved by her stop-start words. It was in the subtext of her threats, her cautions, always flickering beneath the surface like a lizard’s tongue. Yet we made our way to the Holocaust Memorial Museum as though it was just an item on an itinerary – though that should have been warning enough: we had never done itineraries before; holidays meant ice cream, squabbles and swimming costumes. This is what we expected and this is what we’d remember – and it would only be a few days before we’d be doing a relatively good impression of a family still in one piece. We’d get to Cape Cod and share a house with a couple who called each other bunny love and panda cub, who made their children silver dollar pancakes for breakfast and collected jingle shells. We played along for two weeks, never needing to be told what not to say. I always thought my mother behaved impeccably, her fears kept in check, her physical ailments joked off when they couldn’t quite be concealed. I wasn’t only grateful for the pretence, I slipped into it, and no one asked why my mother didn’t come along for bike ride and wouldn’t go in the sea, why we had to wait while my father disentangled himself from her attempts to keep him from coming downstairs – her stomach, her head – he couldn’t leave her, not now. The illusion didn’t crack until the mother of the other family pulled me aside to say, ‘Gee, I guess you’re mom is kinda sick,’ and squeezed my arm, ‘she gets kinda mad too, huh?’

Never forget goes the refrain. But what if the memories you have aren’t your own, handed down, told and retold like an inheritance that could never be spent? It was the silences that hung between the words that kept us listening, both anticipating and dreading what would come next – because something always did come next, it was never over; the telling remained compulsive because the story was never quite told, enclosing us in a terror that drew much of its force from remaining unknown. Perhaps it was this that made me feel, standing outside the Holocaust Memorial Museum under a perfect sky, that my head was being held under water. My mother would hear her father wake himself calling out for his parents; his nightmares became hers, hers became mine. Death never frightened me – but being caught did, it was the waiting that kept me up most nights, sure every sound was the Nazis coming for me. I dusted the nights off in the morning, put on my school uniform, tried to brush out the knots in my hair. Those nights didn’t lunge into daylight until we got to the museum in D.C. I felt the plunge in my stomach and knew I couldn’t go in – the atmosphere I’d grown up in dropped round me like a broken parachute.

My brother, then nine, went round with my father while my mother and I sat on the grass outside. I remember us laughing, her teaching me how to do different American accents – and that was the best version of her I’d ever met; just when we’d both come to the edge of our nightmares and closed our eyes she was suddenly alive. This must have been the woman people would tell me about after she died twenty years later, people whose words I would come to treasure and resent at once, conjuring a woman I’d had glimpses of but never known.

When I first began writing Starlings I did not consciously set out to transcribe my story or my family’s – if I had done, I have failed abysmally. Instead bits of my history crept up on me and on to the page, mixing with the characters I’d met parts of and arranged into being. The question ‘Is it autobiographical?’ seems to me to have little value. Novels, like dreams, play out variations of ourselves, our lives – I know I can’t hide any more than I know I can’t, caught up in my own subjective experience, write about my own experience without slipping into fiction. Tell the truth but tell it slant. Is there really any other way to tell it? The truth often is slant – we are all seeing it from different angles and what catches the light today is rarely what we saw. There is also the more fundamental matter of just getting by, of muddling through moment to moment and then, later, withstanding the threat of memory – both its power and its fragility. Human kind may not be able to bear very much reality – but sometimes our survival depends on our instinct to keep it at a remove. Even as I write this I question how much an inescapable element of self-consciousness makes me stray.

Starlings had perhaps already been written before I’d started it, but I couldn’t know that until I’d found a shape for it six years later. The stories I’d been told had become the backdrop to my life; one I couldn’t see I’d been woven into, only one I could feel as it began to unravel – it couldn’t hold together because the few facts I had were always shifting; the contours of reality continually redrawn like a country carved and re-carved after war. Only fiction seemed to offer a space that might circle the instability of hand-me-down memories, containing without erasing the paradoxes, holding the lacunae, to unlock another kind of truth. Not a truth that could be verified against sources, but one distilled from the fear kept alive from what had been left unsaid.

Spliced with silence, ever shifting, the stories I grew up with had an elusive quality that made their pulse relentless; if they had held still they might have become objects I could have set down. Words have been set down now, though, I hope, not definitively – Sally’s story is not mine, even if it might have grown out of it. Reading and writing can sound the echo of ourselves – but there is also the invitation to go beyond that. Where that’s located is different for each of us, but between the words written and the words read, the strange and the familiar become indistinguishable and that’s when fiction ‘truly’ starts to find its shape.

Starlings may have been written before I’d started it, but it was, nevertheless, a matter of making marks in the void, thinking I’d discovered new territory only to find it was already inhabited.

Miranda Gold is a writer currently based in London. Before turning her focus to fiction, Miranda took the Soho Theatre Course for young writers, where her play, Lucky Deck, was selected for development and performance. Starlings is currently being adapted for the stage. She is now working on her second novel. 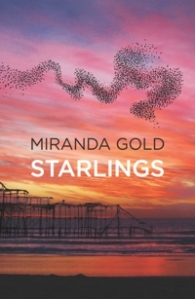 Starlings will be published by Karnac Books on 1st December 2016