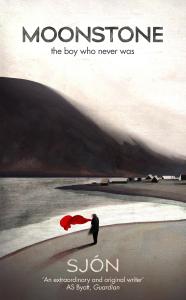 Moonstone: the boy who never was, by Sjón (translated by Victoria Cribb), is a book that, had I known more about it in advance, I probably wouldn’t have chosen to read. Despite this I am glad that I did. Written in sparse, vivid prose it regularly took me outside of my comfort zone with its graphic descriptions. Whilst key to the plot and indicative of the main character’s detachment from society much more than this was explored. These other elements, particularly the insights into Icelandic history, were sufficiently strong to keep me engaged.

The protagonist is sixteen year old Máni Steinn who lives in Reykjavík with his great-grandmother’s sister. He earns his money by performing consensual sex acts with men. Homosexuality is outlawed so he has no shortage of customers for his services. Máni has always been a loner spending much of his free time watching films at the two cinemas in the town. He also studies people, particularly a young woman he refers to as Sóla G—. He appears content living within his thoughts and imagination.

The story opens in October 1918 when the Katla volcano erupts. The Great War is in its final throes far away and the devastation wrought by the Spanish flu is about to arrive. In the next few months Iceland, and Máni’s life, will undergo radical change.

There is a stark beauty to the writing despite the dark subject matter. Máni maintains his signature detachment as he watches the townspeople react to trauma and tragedy. Families mourn their many dead. Iceland is granted its freedom as a nation state. Máni cannot remain a mere spectator to events forever.

The final chapters are set ten years later. Despite several rereads I failed to understood the denouement and feel frustrated that I have missed what I expected to offer some nugget of clarity.

At less than 150 pages this is a short work of fiction but not one that will be quickly forgotten. Where it not that open discussion may spoil the reveal for future readers I would be seeking other’s interpretation of those final pages.

My copy of this book was provided gratis by the publisher, Sceptre.