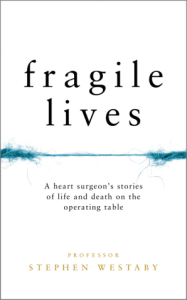 “A successful cardiac surgeon is a man who, when asked to identify the three best surgeons in the world, has difficulty in naming the other two.”

Fragile Lives, by Professor Stephen Westaby, is a memoir that is both awe inspiring and heart-rending. It tells the story of the medical career of a man raised in working class Scunthorpe who became a world class, ground-breaking cardiac surgeon before watching his life saving profession being stymied by the NHS bureaucracy that we know today.

The first few chapters cover Westaby’s childhood, inspiration and medical training. Born in the post-war baby boom years he decided young that he wished to be a heart surgeon after watching a television programme, ‘Your Life in Their Hands’, in which American surgeons were able to close a hole in a patient’s heart thanks to the newly created heart-lung machine. Westaby gained entrance to a local grammar school and from there worked towards his dream of medical school. As a teenager he took menial jobs at a hospital, learning as much as he could through observation. His years of medical training at Charing Cross and the Royal Brompton in London brought him to his first surgeries, where he learned that a certain arrogance is necessary for a successful outcome. A surgeon must believe in their own abilities if they are to innovate and thereby save more lives. When a patient is cut open on an operating table the surgeons cannot know exactly what problems they will be required to deal with.

Subsequent chapters look at particular patients whose medical issues Westaby tackled in new ways. Not all of them survive, and those that do are changed.

“extra life is not ordinary life. There’s a price to pay and a second dying to come”

These cases are fascinating if poignant to read. There is an amount of medical detail included but the language used is accessible. Westaby’s confidence in his abilities and willingness to take risks not only saved many of the lives he held in his hands but also led others in his field to do the same. These world class doctors worked together, sharing techniques and outcomes for the good of their patients as well as furthering their own careers.

“For the unfortunate patient, any prospect  of survival depends upon having an experienced trauma surgeon at hand. Few are offered that privilege.”

Westaby worked all over the world and experienced many levels of both staff competence and facility provision. When dealing with a patient who will surely die without intervention, risks seem a price worth paying. This is the way, the only way, that new techniques and treatments can be developed.

A cardiac surgeon must retain a certain detachment as they are dealing every day with the dying who often harbour multiple health issues. Success rates matter. The monetary cost of surgery is high and those controlling the purse strings wish to invest only in proven drugs or equipment.

Pioneering surgery is now threatened by the blame culture. Even proven techniques are being rationed due to the focus on cost, whatever the benefit.

“When a surgeon remains focused on helping as many patients as his ability will allow, some will die. But we should no longer accept substandard facilities, teams or equipment. Otherwise patients will die needlessly.”

By the end of his career Westaby had become disillusioned with the NHS. He had watched too many of his patients die due to a lack of drugs and equipment simply because they are deemed too expensive by non medical decsion makers.

“What mattered was keeping down costs. Death comes cheap.”

Inevitably he looks back on his own younger years with a degree of pride and with more regard than he offers today’s trainees. Setting this aside there is a warning to be heeded. It is understandable that cardiac surgeons feel frustrated with the constraints placed on their ability to work effectively. What this means to the individual patients and their families is the difference between life and death.

Those who believe that the drama of medical TV shows is overplayed should read this book. It is a fascinating account of a career that observed and facilitated huge medical innovation. The effect this had on the patients whose cases are included had me in tears of both sorrow and joy. To anyone with an opinion on the value of national healthcare expenditure, this is a recommended read.

My copy of this book was provided gratis by the publisher, Harper Collins.