As part of my feature on the inaugural Republic of Consciousness Prize for Small Presses I invited those publishers whose books made it through to the shortlist to answer a few questions or write a guest post for my blog. Today I am delighted to welcome Nicky from And Other Stories to tell us a little about this excellent publishing house. I review their contender for the prize, Martin John by Anakana Schofield, here.

And Other Stories was founded by our publisher Stefan Tobler in 2010, as a result of his frustration with the conservative tendencies in the publishing industry, and a desire to do publishing in a different way – a way that was committed to extraordinary writing, rather than guaranteed commercial success.

And readers and critics were apparently ready for this new approach. Two of the books published by And Other Stories in 2011, our first year of operation, went on to be shortlisted for major prizes (the Man Booker Prize for Deborah Levy’s Swimming Home and the Guardian First Book Award for Juan Pablo Villalobos’s Down the Rabbit Hole). Many of our books have gone on to get widespread recognition and to find thousands of readers. In 2016, Lisa Dillman’s translation of Yuri Herrera’s brilliant novel Signs Preceding the End of the World, which weaves together Latin American mythology, US-Mexican border politics and linguistic innovation, won the Best Translated Book Award, and has to date sold over 20,000 copies.

Indeed, both independent publishing and literature in translation have continued to flourish, and we are honoured to be counted alongside so many innovators and risk-takers in having a book shortlisted for the Republic of Consciousness Prize. It has been a privilege to publish Anakana Schofield’s Martin John, a novel that is virtuosic in the way it makes form and content each work to enhance the other, and we were delighted when we heard it had been shortlisted for this prize. 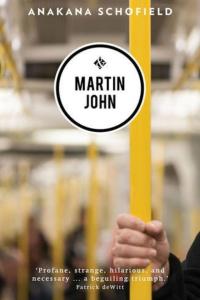 Click on the book cover above to check out what others are saying about Martin John. You may also wish to buy the book.