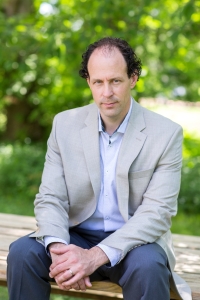 Today I am delighted to welcome Brad Parks, author of Say Nothing, to my blog. In this guest post Brad shares his thoughts on what it takes to write a book.

Having lurked around this blog, I’m aware that Jackie, my gracious host at Never Imitate, Jackie, is a woman interested in all things writing.

And given that I’m the new guy here – Say Nothing is my first book to release in the UK – I probably ought to just shove my hands deep in my pockets, mumble something nice about how you should write what you know, and call it a guest blog post.

Yeah, to hell with that.

I’m here. I’m going to rant. Because while I may be new around here, I’m not new to the writing community. I’ve hung around the bars, the conferences – and, most importantly, the bars at the conferences – long enough. I hear people talk about “talent” (such a misleading word), or “genius” (oh, please) or, worse, “inspiration” (I’ve got your muse right here in my pocket, pal).

And I feel like there’s one thing writers never talk about enough:

By stubbornness, I mean gamely bashing your head against the laptop screen – repeatedly and without letting up – until the words come out right; and then keeping at it, day after tormenting/boring/seemingly pointless day, until the whole manuscript comes out right.

And that has nothing to do with talent; or some kind of God-given genius; or, most of all, some blasted muse that will fly down on gossamer wings and alight on your shoulder.

It has to do with grit. And tenacity. And deciding you are simply going to be tougher than everyone else alive.

A small anecdote to illustrate what I’m talking about:

When my wife was in grad school, she had to learn how to administer intelligence tests and I served as her test dummy. Literally. There was one test – I think it was for seven-year- olds – where you had to rearrange blocks.

The scoring was a sliding scale based on how quickly you could complete the task. You didn’t get any points if it took longer than two minutes, but the catch was the test administrator couldn’t tell you to stop.

I kept fumbling with those stupid blocks for twenty-six minutes before I finally solved a problem that slightly-above- average seven-year- olds could do in a fraction of that time.

But that’s the great thing about writing. There’s no stopwatch on you. And you don’t have to be the brightest seven-year- old – or even a dumb forty-two- year-old. You just have to be willing to do the work.

So, yes, my UK debut, Say Nothing, released last week. And maybe the publisher would like you to believe I am just some supremely talented – God, I hate that word – scribbler who was gifted this amazing story one day. But I know better.

And now so do you.

Brad Parks is the only author to have won the Shamus, Nero, and Lefty Awards, three of American crime fiction’s most prestigious prizes. Say Nothing is his UK debut. 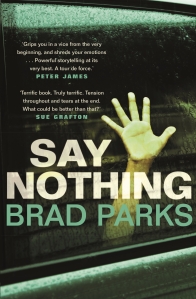 Say Nothing is published by Faber and Faber and is available to buy now. 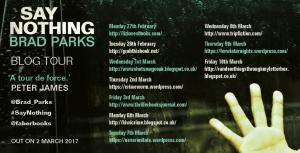 This post is a stop on the Say Nothing Blog Tour. Do check out the other posts, detailed above.