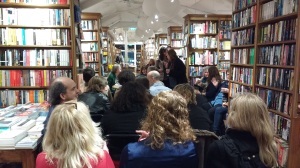 Yesterday evening I attended the Book Launch for Sarah Hilary’s latest crime thriller, Quieter Than Killing (reviewed here). Held in one of Bath’s beautiful independent bookshops, Toppings, it drew a large and friendly crowd. I was soon chatting to two Bristol based crime book reviewers who were unimpressed by my efforts to get there. Ladies, that 45 minute journey is only straightforward for those comfortable with driving a car…

Unusually for me I opted to settle at the back when we were invited to take our seats. Having attended several of Sarah’s events I wanted to take this opportunity to photograph the crowd.

Sarah opened proceedings by thanking her publisher, agent and family before reading from her book to a rapt audience. Alison Graham (@TVAlisonGraham), whose other claims to fame includes her work with the Radio Times, then asked an excellent range of questions.

Throughout the Marnie Rome series the plot arc of her foster brother Stephen, who murdered her parents when he was fourteen years old, is developed. Why did he do it?

Sarah talked of Stephen’s obsession with Marnie and the emptiness he feels, how Marnie fills a void in him, and that she got away. In Quieter Than Killing his predicament is presented in a way that draws a degree of sympathy from the reader. Sarah does not plot her books prior to writing so cannot say if or when his reasons for killing will be revealed.

Alison asked where Marnie Rome came from, and also the writing in general.

We were told that Marnie arrived fully developed and first appeared in a story that has not been published – thank goodness according to Sarah! She has always been scribbling stories but didn’t make any serious attempt to write until about fifteen years ago, starting with short stories and flash fiction. A friend told her that she had a dark streak and suggested she try her hand at the crime genre. Novel writing commenced six to seven years ago.

As this series has progressed Marnie has become softer, nicer. Sarah’s child has suggested that she kill Noah (cue gasps of horror from the audience) to explore the emotional impact on Marnie. No decisions have been made…

Sarah was asked why Marnie has a tattoo.

It is all about secrets. The quotes are from Albert Camus, who Sarah loves, although she smiled at how pretentious this can seem. She wanted Marnie to have chosen to undertake something painful, a youthful decision that she may, in later life, regret. At a book club event Sarah was taken to task about the cost “How could an 18 year old afford such an expensive procedure?” She would not reveal if she herself has a tattoo.

Sarah’s empathy and her ability to write children so well was commented on.

Her mother spent several years in a Japanese prisoner of war camp and Sarah was raised on her grandmother’s stories from this time, although they were told as interesting anecdotes, the full horror only being understood as she got older and learned more from history. It taught Sarah that stories can be multi-faceted. 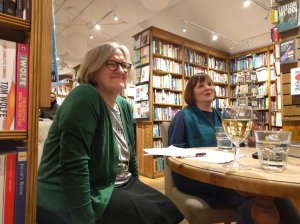 There was a discussion of London, where Sarah lived for eleven years, and of her fascination with Battersea Power Station. She has no plans to buy one of the modern apartments being built there – having Sting as a neighbour, with his noisy, tantric sex, was not appealing.

Sarah was asked if she would consider setting a book in Bath. The answer was no. Three severed feet have been found in the city in recent years. Local news outlets considered if these may be art installations or a student prank. There was no suggestion of a serial killer – as if such a thing could never happen in Bath. She may consider taking Marnie north though, perhaps to Cumbria.

Questions were invited from the audience and Sarah was asked if she would consider writing anything other than crime fiction.

She has an idea for a dark and twisty ghost story, although suspects it would be more of a novella. She has also considered a standalone psychological thriller. There are at least two more Marnie Rome books to come (my note – yay!).

Did Sarah know from the beginning that she would write a series?

This was always her hope. She wanted to take Marnie on a journey, developing the character as she was affected by her various experiences. Character is what matters. A diverse cast, especially in London, is a reflection of reality. Characters do not need to be nice to be compelling.

Good fiction is about raising questions in the reader’s mind. Crime fiction, and also young adult fiction, offer scope for exploring a wide range of social and political issues. 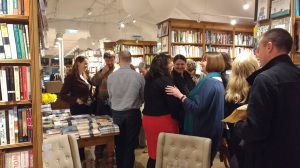 After the questions Sarah took time to chat to eager members of her audience who then cleared the counter of the enticing, new hardback editions of her book. A long queue formed for these to be signed at which point I took my leave. This was an excellent event and well worth that anxiety inducing drive. 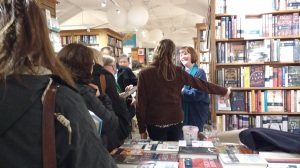 Quieter Than Killing is published by Headline and is available to buy now. 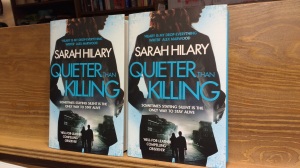