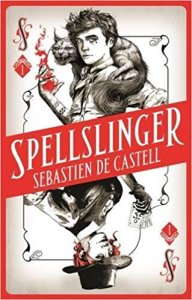 Spellslinger, by Sebastien de Castell, is the first book in a proposed fantasy series aimed at young adults. Its protagonist is fifteen year old Kellen, an initiate in a land where those who can pass four tests before their sixteenth birthday become powerful magicians. Kellen is from a respected family but his magical abilities are weak. He faces the prospect of a life of servitude if he fails the tests.

The story opens with a duel and the arrival of a stranger who saves Kellen’s life. Introducing herself as Ferius Parfax she shows little respect for the Mage’s ways. When Kellen’s family are ambushed as they take him home to recover from his ordeal she once again steps in to help, thereby joining them as a target for a rival family.

Such rivalry is supposedly banned but with the death of the clan prince there is a power vacuum that both families intend to fill. Kellen’s actions risk dishonouring his parents but others are taking an interest in the attention Ferius continues to pay him. The dowager magus issues a summons and requests he find out more about this enigmatic stranger in order to report back. Kellen is uncomfortable with his role as a spy but is intrigued by the dowager and her hermit like existence within the opulence of the magnificent palace.

In many ways this is a standard story of an arrogant, ruling elite and the behaviour their young people will accept as normal, and indeed aspire to, having been raised to think of themselves in a certain way. Kellen begins to question the supposed truths he has been fed, but perhaps only because his own gilded future is threatened by his lack of magical ability. His younger sister is the family protégé, the apple of his parents’ eye. Kellen is appalled to discover why he is more of a worry to them than he ever realised.

The self-importance of the mages and their sanctioned brutality in order to maintain their privilege may be universal, but the twists and turns of this story keep the reader engaged. The writing is taut with the darkness of the plot relieved by humour. The squirrel cats are a fabulous creation.

History will always be manipulated by the victors. It is the gradual reveal of truth within this tale, complete with multi faceted intrigue and nuance, which provide wider perspective and a story worth reading. This is an enjoyable adventure with a satisfying denouement that offers an introduction to a fantasy world that the author may now develop as the series progresses. I look forward to discovering where Kellen goes next.

My copy of this book was provided gratis by the publisher, Hot Key Books.