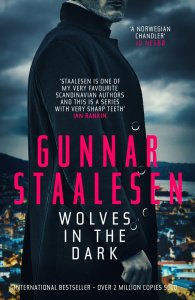 Wolves in the Dark, by Gunnar Staalesen (translated by Don Bartlett), is the third book in the author’s Varg Veum series of crime thrillers to be translated into English by Orenda Books (you may read my reviews of the first two here and here). Four years after the death of his beloved Karin, Veum is slowly dragging himself from the mire into which his grief took him. He is now in a relationship with Sølvi, although her faith in him is about to be tested.

The book opens with Veum being arrested for accessing child pornography on line. He is accused of being part of an international operation supplying images and videos of such content. Incriminating evidence is found on his office computer and personal laptop. Veum vehemently denies the charges but the investigating officers do not believe his claim that he had no idea the files were there. When his lawyer requests information about potential contacts from his past who may be seeking revenge, Veum is forced to admit to alcohol induced gaps in his memory since Karin’s death.

As a private investigator of many years standing Veum has accumulated a bank of enemies. He delves his patchy recollections but realises that the evidence against him and the understandable revulsion felt by those who are convinced of his guilt undermine his protestations of innocence. When an opportunity to escape incarceration unexpectedly presents itself he goes on the run. He must solve his own case before being recaptured or face a prison term where he would likely be punished by inmates as the worst possible type of offender.

The plot is tightly constructed and written with a droll humour that offers relief from the sickening subject matter and page turning tension. Veum deploys a direct approach to people of interest in his investigations, a tactic that further angers those he interrogates but which builds the intrigue for the reader. There are the requisite twists and turns with blind alleys and dubious characters. Few of those he encounters emerge untainted in some way.

This challenging topic is tackled with empathy and skill, characters rising from the pages fully formed, grotesquely believable. Veum may not be entirely likable but it is hard not to confer a degree of sympathy for his predicament.

A dark thriller that uses its setting in Norway to fine affect. This is a gritty, gripping read.

This post is a stop on the Wolves in the Dark Blog Tour. Do check out the other blogs taking part, detailed below. 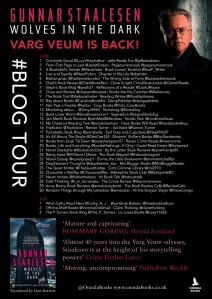 Wolves in the Dark is published by Orenda Books and is available to buy now.