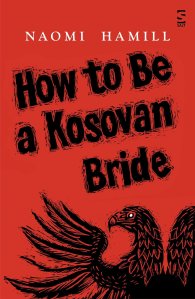 How to Be a Kosovan Bride, by Naomi Hamill, follows the trajectory of two young women living in newly liberated but still deeply traditional, contemporary Kosovo. Both enter into marriages sanctioned by their respective families while other girls their age continue with school. One is warmly welcomed by her in-laws but discovers that life as a wife is not as satisfying as she had hoped. The other becomes a Returned Girl, rejected when her husband accuses her of lying about her virginity.

The Returned Girl determines that she will not accept a marriage to a lesser man just for the sake of form. Instead she will pick up her studies and, despite the skewed entry system, try for university. Her family support her efforts, ignoring the looks and comments from their local community.

The Kosovan Wife quickly falls pregnant, much to the delight of her husband and his parents with whom they live. They regard her as a good girl, believing their son has made an excellent choice. The Kosovan Wife is grateful that, for now at least, he leaves her alone.

Interwoven with the lives of these two women are related tales of the previous generation during the Kosovo War. Many are still haunted by the cruelties inflicted by the occupying soldiers from whom they fled into the mountains, where they struggled to survive the hunger and cold. Those who returned often found that their homes had been destroyed. Although wishing to move forward, the older generation’s hopes for the future are at odds with many of the young women’s dreams of personal freedom, which traditional living precludes.

The Returned Girl is much taken by the idea of life in London. University offers her the chance to meet foreigners and secretly, scandalously, she dates boys her family do not know. She acquires an interest in politics. She starts to write down her relatives’ stories from the war.

The Kosovan Wife is also writing, as a means to escape the increasing unhappiness of her married life. She retells an old folk tale in which a good woman is wronged by a series of men. Unlike the Kosovan Wife’s experiences, these men are taken to task for their behaviour and thereby gain understanding.

The rhythm and form of the narrative quietly capture the difficulties to be faced when female aspiration stretches beyond the widely accepted limitations of weddings, babies and home. Whatever path taken, the glimpsed alternatives bring into question choices made. Tradition and poverty prove as constricting to women as closed borders.

This subtle exploration of the complexities of life in newly liberated Kosovo is presented in nuanced, engaging prose. A modern history told through its people. An intelligent, rewarding story.

2 comments on “Book Review: How to Be a Kosovan Bride”