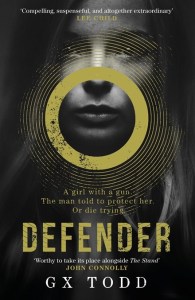 Defender, by GX Todd, is the first book in a proposed series set in a post-apocalyptic America. The Voices have arrived, from place unknown, with a purpose that is unclear. They occupy the minds of human hosts and fill their thoughts with despair. Mass murders and suicides follow. Those who are left must scavenge abandoned resources to survive. The breakdown of society results in everyone being deemed a potential threat, and with good cause.

Lacey is a teenager, protected from the ongoing social disintegration by her grandmother, until the old lady dies. Left alone in a remote farmhouse, Lacey concocts a plan that will enable her to join her older sister who lives many miles away.

Pilgrim encounters Lacey by the side of the road and is persuaded, against his better judgement, to offer her a lift. Pilgrim is swayed in his decisions by The Voice inside his head.

The pair set off together but almost immediately find themselves in mortal danger. It is the start of a fast paced, deadly adventure.

A disparate group led by two sadists are sifting towns they pass through for survivors. When they capture Lacey they regard her as a disposable plaything, until they realise that she has information of value. They have not counted on her determination, nor on Pilgrim’s decision to offer his protection.

The writing is taut and slick with the fast moving action keeping the reader engaged. The unrelenting violence felt exhausting in places – in many ways it reminded me of the Mad Max world.

The bad guys are very, very bad. The good guys are capable of exertion despite horrific injuries, a lack of sustenance and limited sleep. The world portrayed has many intriguing elements. Explanations are drip fed but often rather vague.

Although acknowledging the many strengths of this book I retain reservations. I appreciate that the bad guys’ behaviour is a part of the dystopian world created, but a more nuanced approach would have appealed.

This story would likely work well on screen, and it is an enjoyable enough read. In such a fictional world it feels churlish to desire more human realism.

My copy of this book was provided gratis by the publisher, Headline.