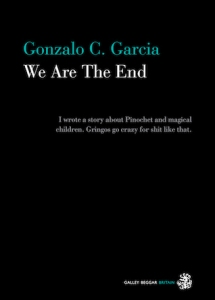 We Are The End, by Gonzalo C. Garcia, is a book from one of my favourite publishers and therefore a story I wanted to enjoy. Unfortunately I did not. My negative reaction led me to consider not posting this review but I try to be honest with my readers. The structure of the tale may have been intended as edgy, contemporary, experimental. I felt it lacked depth and coherency.

The protagonist is Tomás, a twenty-seven year old computer games designer living in Santiago who teaches at the local university one day a week. Tomás fits the often unjust cliché of the media derided millenial. He is self-absorbed and impractical, seeking validation without effort. Although desperate to reconnect with his ex-girlfriend, Eva, his attitude towards her is one of ownership and a desire for sex.

Tomás has recently moved into a new flat but has yet to put together a bed frame, sleeping instead on the floor or a couch. Eva took many of their possessions when she left so he drinks his coffee from the jug it is brewed in and eats his take-away meals from paper plates. His inability to move on with his life appears to preclude him from replacing what most would regard as essentials. He may not be rich but, from his other spending, could afford such basics.

Tomás is obsessed by Eva, refusing to accept their relationship is finished, something she has made clear. He drifts through his days achieving little, including the work required by his employers. When he manages to sleep he has vivid dreams. Between his wakeful and sleeping fantasies it can be a challenge at times to understand what is real.

A mutual friend informs Tomás that Eva, a marine biologist, has gone to work in Antarctica. Tomás decides that he will follow her, thereby proving his devotion and impressing her with his ability to be spontaneous. His planning is ludicrous but he does not appear to see this. If the ridiculousness of his purchases offers an attempt at humour it lacks urbanity.

Following a liason with a student, Tomás befriends a group of young people who work at a pawn shop. He attends events where he feels older than most, his concern at aging a recurrent theme. He is mocked for the way he chooses to dress and his general behaviour.

The writing is divided into sections narrating Tomás’s day to day activities, curated memories, ideas for computer games, and his dreams. The continuity can be somewhat fluid in places. His relationships with family and friends appear shallow and deceitful – his personal view of himself requiring that everyone see him in a more positive light than is deserved. His need to isolate himself from reality adds to the loneliness he will not own. His life has stalled.

I suspect that readers are meant to find many of the recurring themes depicted humorous, there is an element of burlesque. Tomás’s sexual fantasies culminate in a disturbing idea for a computer game that I found grotesque.

Tomás is envious of friends’ success, especially their depiction in memes. There is further irony such as a self proclaimed satanist named Jesús, and the absurdity of many situations Tomás finds himself in. He has a preoccupation with used chewing gum stuck under a desk. He considers himself busy yet does little with his days.

Water is referred to in many ways: the polluted river; a bath filled with booze that he climbs into fully dressed; the rainy weather and his lack of coat; a hole dripping water from his flat’s ceiling; his dreams of Eva and a house by the sea. Any joined up significance remains a mystery.

The roles of the protesters, party goers and various retailers add colour but little of substance. Tomás is depicted as impractical and oblivious; there are shades of parody, attempts at panache, but they fall short in conviction.

The book is a little over three hundred pages long. After one hundred pages an event was related which renewed my flagging interest. It was not retained. At just beyond two hundred pages there occured another event which was enough to propel me towards the end. That I was noticing such progress, willing myself to continue, demonstrates my lack of engagement.

I have the greatest respect for this small publisher’s ability to discover quality fiction. I will be interested in how other readers take to this tale with its often puerile representations. It was not for me.

My copy of this book was provided gratis by the publisher, Galley Beggar.

3 comments on “Book Review: We Are The End”