As part of my feature on The Republic of Consciousness Prize for Small Presses I am posting a number of guest reviews written by a couple of my fellow judges. Today I welcome Paul Fulcher who provides his thoughts on The Gallows Pole by Benjamin Myers, published by Bluemoose Books.

Paul is a father of 3 girls, lives in Wimbledon, works in the City, and has a particular interest in the culture and literature of his wife’s homeland of Korea. He is also my other guest reviewer for this feature, Graham Fulcher’s, identical twin.

“So name your Gods lads. Honour them. Live amongst them. And always remember your place. Because England is changing. The wheels of industry turn ever onwards and the trees are falling still. Last week I did chance to meet a man down there in Cragg Vale who told me that soon this valley is to be invaded. He spoke of chimneys and waterways and told of work for those that wanted it, but work that pays a pittance and keeps you enslaved to those that make the money. This man – he told me that this land around us was soon no longer to be our land but that of those who want to reap and rape and bind those of us whose blood is in the sod.”

The independent publisher Bluemoose Books aims to deliver ‘brilliant stories that have travelled from Hebden Bridge, across the border into Lancashire, down to London across to Moscow, Sofia and Budapest and into the United States, Australia, India, Colombia and Greenland, Iceland and Bosnia Herzevogina.

Ben Myers’ The Gallows Pole certainly fits that bill, a story firmly rooted in the Yorkshire moors. Myers’s debut novel Pig Iron was winner of the inaugural Gordon Burn Prize – a prize awarded to ‘novels which dare to enter history and interrogate the past…literature which challenges perceived notions of genre and makes us think again about just what it is that we are reading’, but has chosen to remain with an independent publisher rather than adapt his work to more conventional tastes:

“I feel like as a writer, I’m from the margins, or the underground – a lot of my heroes and influences are people who are on the edge … so I think ‘why bother to chase [the big] publishers?’” (The Guardian)

The Gallows Pole tells the real-life story of “King” David Hartley, leader of the Cragg Vale Coiners in the 18th Century, who clipped gold coins and then produced forged coins with the clippings. Their activities were of sufficient economic import to come to the attention of Parliament and the London authorities, and Hartley’s life (and the novel) ended on the gallows.

Their approach, which, while considerably enriching themselves, enlisted the support of many (but not all) of the local populace is explained on the website Yorkshire Coiners maintained by a present-day direct descendent of David Hartley:

“The Cragg Vale Coiners would pay 22 Shillings for a full size coin (worth 21 shillings) and would then clip and shave up to forty Pence worth of gold from it before returning it to circulation for its face value of 21 Shillings. The lender themselves therefore gained a shilling as a result of the transaction whilst not actually being involved in the clipping. This helped to gain support locally and to conceal the activities of the Coiners, since nobody (except the excise collectors and the Government) suffered a loss and generally all involved made a small gain.”

“The Coiners would use the gold collected from about 7 or 8 genuine coins to create an imitation Portuguese Moidore, with a higher face value of 27 Shillings and feed this fake coin into circulation for its face value. They would only use about 22 Shillings worth of gold to create the fake, so making a substantial profit on each new coin they forged.” 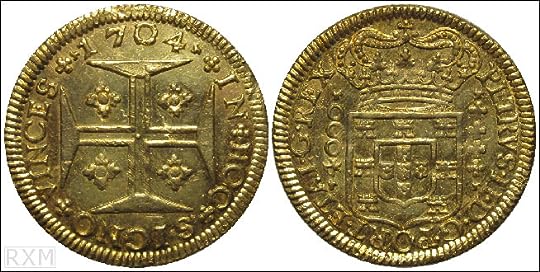 One of the coiners tools from the Heptonstall Museum: 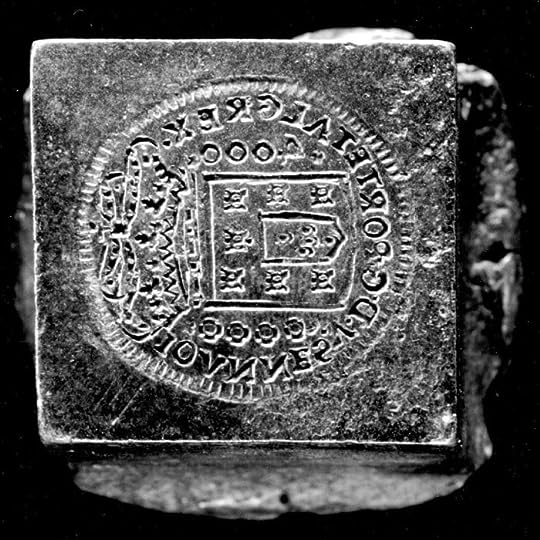 Reviewers saw present-day political references, to Margaret Thatcher’s antagonism to the North, in Myers debut novel that the author himself had not consciously placed there but agreed could be present as a sub-conscious metaphor (A Fiction Habit).

And with The Gallows Pole there are again obvious parallels (implicit and perhaps sub-conscious) to Brexit and the 2017 general election and the rebellion against globalisation. The Coiners saw themselves as fighting – what even David Hartley realises is a losing battle – against the economic forces of the industrial revolution: see the quote that opens my review.

Whereas the authorities – represented by the solicitor Robert Parker (believed by some to be the real-life model for Bronte’s Heathcliff) and the exciseman William Deighton – see them as a regressive resistance to positive change. Deighton wants to:

“Send a message. A message to the hill folk. That times were changing. The empire expanding. That men earned money not made it; that a country ran on rules. Rules for everyone. Call it society. Call it civilisation. From the crown all the way down. Rules. Laws. Restrictions. The dark days were over. New ways were coming. Big ideas. Ideas that would change the world. Call it economy. Call it industry. Call it England.”

And on a second read in December 2017, I could also see echoes of the current fad of cryptocurrencies, threatening to debase fiat money, and cryptoanarchy:

“He had been warned: the authoritarian grip was weakening and this way outright anarchy beckoned.”

Myers has also worked as a freelance music journalist and for each of his novels constructs a playlist ‘of songs and sounds that might shape the narrative. … compiled as one would an imaginary soundtrack to a film adaptation of the work.’

His playlist for this novel can be found at The Quietus, including Leadbelly’s version of The Gallows Pole (itself an adaption of the traditional song ‘The Maid Freed From the Gallows’), from which the novel takes both its name and its epigraph, and, my favourite, Winterfylleth’s The Divination Of Antiquity, from a band that produces ‘passionate, anthemic black metal inspired by the history, heritage and landscapes of England’.

“Pick a coin, any coin, and with a snip snip snip you turn a portuguese guinea to a threepenny bit; and every last watermark just curled up and died and now the king and the queen got a bit on the side. Don’t be bloody silly keep away from bloody Billy cause he’s shopping all the chopping going down along the valley, and supergrassing catches like a plague, to be sure, but it’s nothing that a bullet in the belly couldn’t cure.”

There is also a related musicality to the novel itself, a deliberately dull repetitiveness, strongly reminiscent of David Peace. Myers himself explains it perfectly:

“I was aiming to achieve in the novel – a sort of haunted and ethereal earthiness, which draws on a limited vocabulary and heavy use of repetition. The Gallows Pole features the names of people and places repeated over and over again almost to absurd and annoying levels, in an attempt to induce a trance or evoke a rural reverie within the reader.”

Yet at the same time, when it comes to descriptions of natural surroundings – the weather, flora and fauna and people of the vale – the prose is beautifully lyrical:

“The rain fell like the filings of a milled guinea bit onto a folded piece of paper.”

And describing the ‘supergrasses’ who eventually brought down the Coiners:

“All his life Joseph ‘Belch’ Broadbent had been shrouded in smoke. Years tending the charcoal clamp meant it flavoured not just his clothes and hair with the slow dampened burn of oak and willow and alder, nor merely tanned his skin with soot and blackened dirt, but was within him; it had smoked him from the inside out and left Belch Broadbent with rheumy lidded eyes and a hacking cough that rattled most violently in the early hours.

James Broadbent walked towards the distant rising plume that marked his father’s position as if it were a swarm of wasps leaving its fissure of an arid woodland floor or curl of a crawling tree root.
[…]

The earth was in his father’s scalp and his stubble. It had become him. His body hosted smoke. It was stirred into his essence to dilute that which made him human so that he was now part of the landscape and part of the fire; he was made of the smoke that billowed and rolled and tumbled during the slow process that took felled timber through combustion to become the shards and clots of carbon that fuelled fires and furnaces the length and breadth of Calderdale. He was wood-smoke manifest; man as a settled miasma. A nebulous fellow, burnt brume in stout boots, with a clay pipe clicking between what remained of his teeth.”

The Guardian has already made the comparison that The Gallows Pole might be 2017’s His Bloody Project, but in my view it is much much better than that. A notable point of comparison is that both feature excerpts of a condemned-cell confession but whereas HBP’s version was unrealistically literate, King David Hartley’s thoughts are written in a sort of pidgin English that reads oddly but works if read aloud (rather reminiscent of Paul Kingsnorth’s The Wake, another Gordon Burn Prize winner), and give insight into his motivations, both his self-importance but also his doubts, and his rather delusional visions of the stag-men

“I saw them. Stag-headed men dancing at on the moor at midnight, nostrils flared and steam rising.”

Both the narrative tension and the perspective of the novel are at the micro-level in the enclosed world of the moors and particularly in the thoughts and actions of Hartley. We hear allusions to the impact of the debasement of the coin of the realm on the wider economy, but this largely happens off-page. And both the title of the novel and the fatalistic attitude of the Hartleys leave us in little doubt where the story will end: even the identity of their ultimate betrayer is pretty clear from the opening pages (hence lack of any spoiler alerts in my review).

Perhaps one small weakness of the work was the lack of development of Hartley’s wife.

Unbeknownst to her husband she salts away some of the Coiners output to protect her family from the likely hard times ahead, and, in reality, she bought a new home (for a considerable sum in hard cash) after her husband’s execution and outlived him for 30 or more years. It would have been interesting to have seen into her thoughts, as she acts mostly in the novel as a rather passive observer.

But that is a small flaw – and indeed perhaps no flaw at all, since no novel is entirely comprehensive – in a fascinating work. A book deserving of wider attention and one I hope to see – as His Bloody Project did – featuring in awards.

You may read my review of The Gallows Pole here.

Next week on my blog look out for an interview with Benjamin Myers, the author of this book.

Keep up with all the news on The Republic of Consciousness Prize for Small Presses by following on Twitter: @PrizeRofc