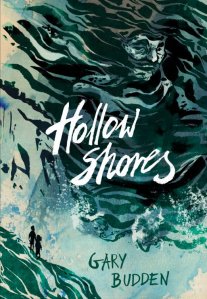 Hollow Shores, by Gary Budden, is a collection of twenty-one short stories interlinked by people who, for a time at least, inhabit a stretch of the Kent coastline known as the Hollow Shore. The characters weave in and out of each other’s lives creating ripples whose effects are rarely understood by those involved. The place is walked through, escaped from and returned to. The stories are works of fiction but, as several of the offerings explore, although based on fact so are an individual’s memories.

The collection opens with Breakdown. On a cold, dark night a long distance lorry driver has a frightening encounter in the Black Forest of Germany. The reality of the experience is the effect it has more than the actuality of what is seen. The memory survives through the telling, the passing on to others who then appropriate the tale for themselves. Family history comes alive when it is retold, each version reflecting what is needed at that time by the narrator.

Saltmarsh presents the coastline through the eyes of a returner from London, who is walking the shoreline to meet an old friend. He is seeing the place afresh as he reflects on the direction his life has taken. His journey is not the seven mile hike but rather his ruminations along the way.

Further stories tell of a beached whale; of largely disregarded people who have become landmarks; of the spaces most will pass by without seeing. There are histories being made in the peripheries of each life lived.

Up and Coming expands on this theme. The protagonist is in a bar with friends waiting to attend a gig, observing those around him, realising that this moment will soon be a part of his past. He mourns the loss of a much loved venue, envies the young people who still have such memories to make. The author captures the judgements being silently made when others act in ways that differ from an individuals valued ideals. Impressions are often flawed, people’s intentions misunderstood. Despite time spent together few truly listen to what is being said, or seek out meaning behind silences. Later in life, when what was happening back then is discussed, there is surprise at what was missed despite being there.

The protagonists in these stories are mainly middle-aged so have awareness of time passing by. There is an undercurrent of regret, a longing for what can now feel out of reach. Relationships flounder as needs are neglected or missed.

Key characters recur in many of the stories set in different times and places. Told from varying points of view the reader gets to know these people, although in snapshots rather than fully developed, much like meeting old friends.

The writing is perceptive and pithy. From the title story:

“Julie left on Christmas Day. Married for three years, together for five. Upped and left with the gravy and roast potatoes still steaming on our clean new flooring, uneaten evidence of the final argument. What a waste of food.”

In this story the protagonist chats to a local drunk who comments about passersby, ‘They didn’t listen’ – who does? Eventually he must move back to his childhood bedroom, live with his Telegraph reading parents, listen to his mother update him on people he has no interest in. Yet he discovers that the town he was so desperate to escape from as a teenager now has a certain appeal.

The idea that people are rarely known even by loved ones is taken a step further in Mission Drift which features a man infiltrating a group of suspected activists by living amongst them undercover. Despite being a married father, he lives with one of the group and has a child with her. He wonders how many others are living like him, if he knows them without knowing.

I loved the language and mood of this book, the essence of life captured alongside the sense of place. From The Wrecking Days:

“The name came later, as we retrofitted chunks of our lives and tied them up with clever titles. We were underachievers with verbal flair, lyrical flourishes and a sharp wit, packaging our time into neat parcels. The wrecking days are, for most of us at least, safely compartmentalised, sitting in a past as unrecoverable as the eroding waterline of a home I haven’t visited in years.”

People inevitably change over time and so do places, but what is remembered is as fictional as perceptions of the present day. These stories succinctly capture the importance of life’s mundanities. They are incisive, intriguing and impressively affecting.

My copy of this book was provided gratis by the publisher, dead ink.