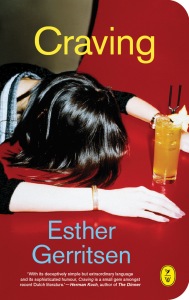 Craving, by Esther Gerritsen (translated by Michele Hutchison), is a story of family, and social disconnection. Its protagonists are Elisabeth and Coco, a mother and daughter with an uneasy relationship. The book opens with a chance encounter in the street where Elisabeth tells her child that she is dying of cancer. Coco is quietly angry with her mother, a regular reaction when they are together. She looks forward to being comforted when she shares the news with others who will expect her to be upset in a different way.

Coco has an older boyfriend, Hans, who she regularly provokes to create a reaction. She recognises that he is growing tired of her behaviour, but she is not willing to allow their relationship to end. She hopes that having a sick mother will help to occupy his thoughts, buying her more time with him. She is angered when he will not channel his feelings of indignation or irritation into rough sex. She seeks extreme behaviour in order to feel, to escape what she considers the blandness of everyday experiences.

Elisabeth has never known how to cope with Coco’s behaviour. From an early age her daughter was a malcontented child and they shared little affection. Now she finds that she cannot speak openly for fear that her true thoughts will be revealed. Elisabeth can talk to her hairdresser, to her work colleague, Martin, but not to her truculent daughter.

Coco lived with her father and his second wife, Miriam, after her parents’ separated. Miriam encouraged Coco and Elisabeth to maintain contact but neither enjoyed their time together. Elisabeth resented that her husband left, not having realised he was unhappy in their marriage. She believes the catalyst for the breakdown was Coco’s birth.

Coco’s landlord has given her notice so she decides to move in with Elisabeth, to be seen to be there for her mother now that she is dying. She hopes for answers to questions about why her mother behaved as she did when she was a child, details of stories her father has told her that, although not remembered first hand, have created resentment. Elisabeth wants to behave like a good mother so reluctantly agrees to Coco’s plan. They circle each other trying to work out how to be together. Elisabeth does not wish to lie to her child but neither can she bring herself to share her true thoughts when questioned. Coco becomes ever more agitated. Elisabeth observes, accepting yet wishing Coco would leave.

There is a sense of foreboding in the language, a question of cause and effect in Coco’s destructive behaviour. As Elisabeth’s health deteriorates she has offers of help from Martin, her ex-husband, Hans, even her hairdresser. She seeks a tidy ending that her daughter, once again, threatens to blemish.

Although disturbing and somewhat brutal in places this is a tale of longing, a search for an elusive conformity that will not sit easily with either of the protagonists. Societal expectations create a culture of blame when roles are not adhered to. The tale provides a reminder that unconditional love is not a right, even within families.

My copy of this book was provided gratis by the publisher, World Editions.

Craving has just been adapted for the screen and was premiered last month at the Rotterdam International Film Festival.