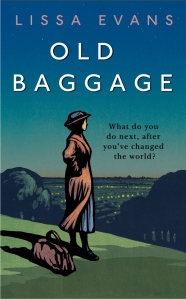 In Lissa Evans’s previous novel, Crooked Heart, the reader is briefly introduced to Mattie Simpkin, an elderly lady who was once a suffragette. Old Baggage is set a decade earlier and offers further details on the life of this idiosyncratic character. Neither book relies on the other for its story but, having enjoyed the earlier work, I was delighted by the links that exist.

The tale opens in 1928. Mattie is walking across Hampstead Heath when she is assailed by a memory, her momentary distraction enabling a thief to make off with her handbag. In attempting to waylay the malefactor she injures a girl who then threatens legal action. Mattie’s good friend, Florrie Lee, steps in to help, offering the girl, Ida Pearse, a position in the house where she lives with Mattie. Florrie works as a Health Visitor and is the more practical and empathetic of the pair. She grew up in a poor household whereas Mattie came from a wealthy family. This disparity is more significant than Mattie can realise. The causes she cares about are linked to female equality and aspiration which can be stymied by family circumstances as much as legislation.

Mattie went to university in a time when these institutions refused to confer a degree on a woman, however well she did in their exams. As a suffragette she was imprisoned and badly treated leading to a lifelong contempt for upholders of law and order. When she sees how little Ida knows about the rights Mattie has spent her life fighting for, the older woman decides this is indicative of an important matter that she can address. She places an advertisement in the local newspaper inviting girls to join a club which she will use to propagate her views. As she says to a friend:

“one should try to spark a few fresh lights along the way. To be a tinderbox rather than a candle.”

Mattie is not the only suffragette looking to influence the young people of London. The idea for the girls’ club was inspired by an encounter with another old friend whose outlook has moved towards Fascism. The two groups, which the ladies set up, hold their meetings on the Heath and soon become rivals leading to a confrontation. Mattie has been foolish in her dealings with the attendees at her club – favouring one for personal reasons – with cataclysmic results.

The minor plot threads and contextual references add depth to what is an entertaining and accessible story. Mattie is a wonderful character, her drive, intelligence and willingness to take responsibility for her headstrong actions and their consequences an inspiration. Florrie offers a different perspective, quietly supporting and mopping up after her friend. The varied milieu offer a stark reminder of the importance of the welfare state.

It takes skill to write a book that is congenial and captivating whilst offering the reader interesting topics to chew on. The attributes and actions of the characters demonstrate how multifaceted an individual can be, and how often one judges on incomplete information. Old Baggage is funny, tender, fervent and affecting. It does not shy away from important issues but neither does it preach. It is a joy to read.