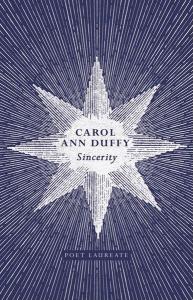 Poetry, perhaps even more so than prose, is deeply personal in both the writing and the reading. When it hits the mark its effect can be visceral. In a sizeable collection such as Sincerity there will likely be certain poems that do not resonate quite so deeply. Structure and use of language can still be appreciated even when the intended significance remains elusive or opaque.

The issues explored in this collection travel through personal memories to a wider worldview. There are allusions to Trump – ‘Gorilla’ is particularly amusing – and other powerful figures from taught history. In common is their narcissism and view of the insignificance of those who have served them, whether by choice or coercion.

“And when they are here, they are unseen;
Chauffeured in blacked-out cars to the bars
in the heavens – far, glittering shards –
To look down
on our lucrative democracy.

Though they have bought the same face,
so they will know each other.”

The lack of empathy in certain politician’s reactions to Grenfell is compared to Aberfan.

The homeless and cruelty of factory farms warrant separate mentions.

Other historic figures featured include kings and queens of old. ‘What Tennyson Didn’t Know’ posits that Queen Victoria could have used her grief at widowhood as a disguise, enabling her to live a life previously denied.

Literary notables also feature. ‘Charlotte‘ imagines the frustrations felt by the Brontë sister of that name.

“the prose seethes, will not let you be, be thus;
bog-burst of pain, fame, love, unluck. True; enough.
So your stiff doll steps in the dollshouse parsonage.
So your writer’s hand the hand of a god rending the roof.”

Amongst the more personal musings are reflections on the passing of time. In remembrances from childhood there are poems reflecting the boredom and mischief of holidays, and the dryness of schooldays:

“Dark school. You learn now – the black paintings
In their charred frames; the old wars;
the voiceless speeches in the library,
the fixed equations – ab invito.
Above the glass roof of the chemistry lab,
insolent, truant stars squander their light.”

A parent laments their empty nest. A grown child experiences their parent’s death. Shade and influence are cast from beyond the grave.

‘Burgling‘ is a clever take on the rarity and value of silence for a writer – a reflection on a retreat taken despite the business of other commitments.

“I steal a silver sonnet and leave sharpish”

Although love and relationships are recurring themes these are never sugar coated. The faults of parents are remembered alongside their more positive attributes. Gardens and woodland spark cherished memories.

In ‘Physics‘, a marriage avoided in the past is regarded as a wise decision. Alternative scenarios are imagined that do not proceed to the much vaunted happy ever after of the institution.

“You walk towards me across the terrace,
all I want of love
in that world –
correct when you promised
all would be well. Well,
then again, I feign sleep at your footfall
and we are in Hell.”

Death is considered in several of the poems but not feared. The paths walked by the famous are visited with interest but also in the knowledge that it is the cemetery that now holds their names.

The collection closes beautifully with the titular poem, spare and elegiac.

“I look up
from the hill at Moniack
to see my breath
seek its rightful place
with the stars
and everyone else who breathes.”

Any Cop?: This varied collection contains much of note – the humour and sagacity lifting the wide ranging musings; their broad scope remaining grounded and at times piercing. It is an enjoyable if not always easy read. Complex, colourful and humane, it is a worthy swansong for Duffy’s tenure as Poet Laureate.