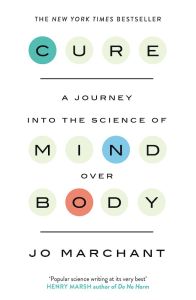 Medical research scientists are required to be rigorous in their investigations but also open minded to the lessons that can be learned, both positive and negative, from the results of clinical trials. Drugs that show early promise may not be as effective when tested over the long term on a wide variety of subjects. Side effects of treatments and surgical interventions can be as harmful as the problems they attempt to resolve.

While doctors may be eager to find more effective treatments, particularly for the growing number of chronic conditions, there are deep seated biases against certain alternatives: homeopathic remedies, mindfulness and meditation, distraction techniques, hypnotism, religious belief. What Cure sets out to do is to look at the trials that have been undertaken around such so called woo woo treatments and scientifically question their efficacy.

The book opens with an investigation into the placebo – pills given to patients that are known to contain no active ingredient, or treatment that has been shown not to work after accounting for the placebo effect in test results. Time and again trials show that many patients’ outcomes improve when given a placebo. The author asks why such a cheap and easy alternative is not offered when it could have clinical value. It is now known that the body is capable of producing its own powerful drugs, e.g. endorphins. The brain is a natural pharmacy.

“If someone takes a placebo and feels their pain melt away, it isn’t trickery, wishful thinking, or all in the mind. It is a physical mechanism, as concrete as the effects of any drug.”

There are important limitations in the placebo as treatment; it is limited to the natural tools that the body has available.

“Placebos are good at influencing how we feel but there’s little evidence that they affect measures we’re not consciously aware of”
“Feeling great isn’t everything. We also want to be kept alive.”

Yet for those who do not feel great, placebos could offer a welcome improvement in the way they live. Certain patient groups, especially those with chronic conditions such as CFS / ME, reject that the mind can have such an important impact as they then feel they are being blamed for their illness. This separation of the mind and the body, and the biases such thinking uncovers, may be one reason why the treatments looked at in this book are often dismissed.

Another reason is the difficulty of obtaining funding for large scale clinical trials. Drugs companies are unlikely to support investigations into treatments that will lead to fewer expensive drugs being administered.

Living with long term stress has been shown to create physiological damage and to rewire the brain.

“people in a threat state take longer to recover to baseline once a task is over […] Over time, the extra strain on the heart can lead to hypertension. And as we’ve seen, repeated activation of cortisol can damage the immune system.”

The author investigates a variety of alternative treatments that attempt to train the body to deal with challenges and decrease the harm caused.

“Just as with physical exercise, if we put our bodies under a manageable amount of stress, then go home and rest, this eventually makes us stronger and more resilient.”

The effects of meditation and mindfulness are studied and compared to the effects of antidepressants. Once again, certain patients enjoy benefits yet many medical practitioners dismiss such treatments as nonsense, the proponents delusional. Prejudices are strong.

One problem with alternative and holistic treatments is the way modern medicine is practiced. In the UK an initial consultation typically involves a ten minute GP appointment with the expectation at the end that there will be a prescription or potential for surgical intervention. There may not be a pill for every ill but there could be minimally invasive and effective treatment if the patient is willing.

Drugs for stress, depression and chronic pain are costly with damaging side effects such as risk of addiction. Trials have shown time and again that mind-body techniques can work better on many. Despite the evidence, stigma remains.

Religion is shown to have a placebo effect although only if compassionate and accepting rather than threatening. A sense of belonging – the importance of community and damage caused by loneliness – are also investigated. There is a beneficial effect on health when a patient feels they are a part of something bigger.

The author is asking: if an alternative treatment works for a patient then why mock and dismiss it? It is clearly stated that a patient may not simply wish themselves better yet there are ways in which the conscious mind can influence outcomes and deal better with painful situations. There is also the argument that keeping alternative medicine within the NHS allows for regulation and the ability to offer conventional treatments as needed. The potential for harm is acknowledged, such as when proven beneficial medications such as vaccines are withheld for spurious reasons.

Each chapter contains details of a variety of patients’ experiences alongside interviews with clinicians and references to papers and journals in which studies are detailed. Throughout, the writing is warm and accessible, the tone clear and inquiring rather than dogmatic. The reader may decide for themselves if improvements in health are worthwhile even if treatment cannot always be fully, scientifically explained in the traditionally accepted way.

Any Cop?: This is a fascinating approach to a controversial subject. The author offers due diligence and a willingness to look for facts without prejudice. The workings of the mind may not yet be fully understood by doctors but this doesn’t mean it cannot be harnessed for innovative and effective treatments. The book offers a compelling and persuasive contribution to a wider conversation. It may change the way rational and informed readers view alternative medicine.