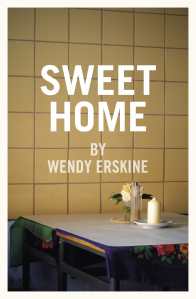 From the Republic of Consciousness Prize for Small Presses 2019 longlist – Sweet Home by Wendy Erskine.

Sweet Home is a collection of ten short stories that prove what powerful tales can be told in this condensed format. All are set in and around contemporary East Belfast. They feature ordinary people as their quiet disappointments and resentments bubble to the surface of their everyday lives. The author captures the quotidian with insight and poignancy along with each character’s yearning for what they perceive to be passing them by. There is a depth of understanding, a recognition that most hurts go unnoticed as individuals deal with their own demons and desires.

The collection opens with To All Their Dues which is told from three points of view. A young woman is trying to establish her new small business; a thug is demanding protection money but fears for the future of his nefarious income; his wife is trying to find a way to cope with her familial past. The way these three flawed lives are presented, with understanding but also clear sighted portrayal of limitations and worst behaviours, demonstrates the wit and skill with which the author writes.

Inakeen is an searingly honest depiction of a mother and son whose lives and aspirations are of little real interest to the other. The son visits his mother out of duty, not understanding how dull she finds his conversation. He does not notice her growing interest in her new neighbours, and how she feels let down by his inability to maintain relationships. While he is bitterly resentful that his former partner left him, his mother misses the younger woman’s company and that of her grandchild. She imagines the enjoyment her new neighbours – three women, one dressed in a burqa – have living together. Without knowing them, she longs to join in.

Observation looks at two families whose teenage daughters are best friends. Lauren is drawn to her mother’s new boyfriend. Cath is intrigued by a family setup so different from her own. Cath’s parents talk of Lauren’s mother in less than flattering terms. There is an undercurrent of denial in how much each character knows about what is going on, and in what is being said.

Locksmiths introduces a young woman raised by her grandmother after her mother was sent to prison. The grandmother is now dead and the mother due for release. The reader is offered views of each of these women through the others’ eyes. Little is flattering.

The titular story is a tale of two couples: a man who returns to Belfast with his English wife, both having established successful careers; the other couple younger and more ordinary, who are employed as gardener and cleaner. The latter pair have a child who becomes the focus of the returned man’s interest. None of these adults are content with their current situation and, to a degree, blame their partners.

Last Supper is set in a coffee shop run on a charitable basis. This skews the terms under which staff and customers operate. Daily tasks are carried out but the success of the enterprise is compromised by limitations imposed by the benefactors. The manager does his best to deal fairly with unrealistic expectations built on crumbling foundations.

Arab States: Mind and Narrative features a middle aged woman who allows her lingering regret at a choice made while at university to distort her current reasoning. She imagines that an old acquaintance, who has written a book, will still be interested in her. She wishes to bask in his reflected success. She tries to remake herself as the intelligent conversationalist she thinks he regarded her as back in the day. She is blind to her current self, which is all others see.

Lady and Dog tells the story of a teacher whose life changed when, as a teenager, her lover was killed. As she approaches retirement she becomes obsessed by a young man who teaches sport to her pupils. The denouement is horrific in ways that made me question why certain deaths shock more than others.

77 Pop Facts You Didn’t Know About Gil Courtney is a list, as described in the title, telling the life story of an almost famous musician. The structure is fun, clever but with a depth of sadness. Growing up on the Cregagh estate, Gil’s father would have preferred his son to take the expected factory job at Mackies. Gil’s exceptional musical abilities as a child were nurtured but these did not lead to long term happiness. The rock and roll lifestyle requires financial resources, the accumulation of which requires business acumen. It is interesting to reflect on the cost of fame and benefits of accepting a more ordinary life.

The Soul has no skin is a shattering tale of a young boy whose life is irreparably denuded by an act of kindness. Barry lives an austere and often lonely life, choosing to eschew ambition and exist below society’s radar. He has experience of being noticed and the scars this created run deep.

No mere summary of these plots can do justice to what is special about the writing. The author gets under the skin of what it means to live in a world striving to offer something better than that which an individual already has. This desire for better, rather than taking pleasure in the here and now, leads to restlessness and a blaming of others. Yet the tales are poignant rather than depressing, understanding more than recriminating. The use of language and fragile intensity make them alluring and satisfying to read.

My copy of this book was provided gratis by the publisher, The Stinging Fly Press.