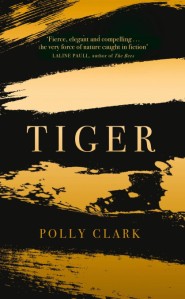 “Edit wanted, with all her heart, to protect her daughter. She wanted better for Zina than love”

Covering an expanse of over 6.6 million square miles, Russia is the world’s largest country by landmass. It includes nine different time zones and shares land borders with 14 neighboring countries. In the Amur region of the far east, forest wildernesses still exist, although they are always at risk from man’s desire to acquire personal wealth at whatever cost to the environment. Here the largest cat on earth, the Siberian tiger, still survives in his natural state. A king tiger will ruthlessly guard and patrol his territory of up to five hundred square miles, within which his females raise their cubs. It is one of the harshest habitats on earth.

Tiger, by Polly Clark, is an exploration of the cost of freedom. Following a prologue set in the Russian Taiga, where a hunter is trying to kill a tiger for its valuable pelt, the story introduces Frieda, an English academic who is researching the behaviour of captive bonobos. Frieda is a morphine addict, using the drug to help her cope with her fears following a vicious street attack several years ago. Frieda has been stealing the drug from her place of work and using it on the premises. She is about to suffer the consequences.

Disgraced but in need of work, Frieda moves to Devon where a privately run zoo requires a keeper. Here she encounters her first tiger, a lone male that is about to be offered a mate. The zoo has purchased a tigress from a Russian dealer. When it is delivered the creature is not as expected.

The second section of the book is based around Tomas who works on a Russian nature reserve in the Amur region. His father manages the venture and is eager to gain the attention of President Putin, who supports the protection of the wild tigers that roam the area. The reader is offered a view of life in the forest, the dangers encountered, and how changing political beliefs have affected the plunder of resources. Decisions made in Tomas’s past haunt him, and he blames his father for his current, lonely existence.

The third section tells the story of Edit, a young village girl living in the Udeghe region, whose grandfather was the local Shaman until such practices were outlawed by the Russians. She has been raised with the traditional stories and songs in which tigers were considered sacred. She is horrified when the man who hopes to marry her assists in the capture and killing of one of these magnificent beasts. Life, however, must go on and time, inevitably, passes. Edit understands that she must marry and is then expected to bear children. She longs for freedom.

Part four opens from the point of view of the tigers as they struggle to survive a particularly harsh winter. The various threads of the tale are then drawn together. There is poignancy and violence. There is cause and effect.

“The mice had changed the weasel’s story. How miraculous it was that all these journeys […] persisted alongside each other, each to be followed and understood separately. Each traversed its own world, with its own time, yet connected with the others at converging moments.”

In developing the various characters the author demonstrates how any action is rarely as simple as good or evil. Men long for a woman to ease their loneliness. They feel satisfied with themselves that they provide for and protect their family unit. Women desire an autonomy that is often beyond men’s comprehension.

“There wasn’t really a place for female things. Leyland was as trapped as everyone involved with tigers in the language of the masculine ideal – the nobility, courage, majesty, and so on, exhibited by the king.”

Yet this tale is more than some sort of feminist manifesto. The men suffer from cultural and personal expectation as much as the women. Love is longed for by all yet becomes a cage – a means of control requiring the surrender of liberty. There is a cost in accepting such captivity. There is also a cost if such strictures are rejected.

The writing is taut and fluid. Subjects are explored with nuance and depth. However flawed the characters, they are drawn with empathy.

My copy of this book was provided gratis by the publisher, riverrun.