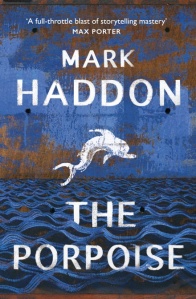 In recent years there has been an upsurge in contemporary fiction writers re-imagining classic myths and tales. As I have read few of the originals I come at these stories with fresh eyes. Perhaps I miss clever references. Perhaps I out myself as being less well read. I have little time for literary snobbery or being told I should read any work. A book should stand on its own merits whatever its inspiration.

The Porpoise is based on the story of Pericles, Prince of Tyre. Alongside older renditions of this tale, the version resurrected by Wilkins and Shakespeare is cited. Other, more divergent, interpretations have also been woven into this new take. Details change over time but the template remains the same: the beautiful daughter of a powerful man is no more than a device to set a young suitor on the journey where he will have his real adventures.

Opening in modern times the story starts with a plane crash in which the only survivor is a newborn child. Her father – a wealthy and powerful aristocrat who is devastated by the loss of his wife – raises their daughter, named Angelica, in what he considers protective seclusion. The description of her childhood is harrowing. When a young man, Darius, visits their home she is quietly desperate for change. The books that have been her solace growing up lead her to believe that Darius will orchestrate her escape. Her father understands the scandal this risks and sets an assassin on the young man’s tail.

Darius flees and, in doing so, travels back in time. He becomes Pericles and is warned by advisors that he must leave Tyre. There is a shipwreck. He encounters and impresses a princess. Further tragedies strike.

Timelines are intertwined. The reader is kept updated as to what is happening to Angelica. There are sections involving Wilkins and Shakespeare. Characters observe the lives they are leading as their past or future selves through dreams. They feel what is happening even though they do not always understand.

It is a story of fathers and daughters, of grief and the cruel madness that grows from acceptance of entitlement. Women are broken because men use them for pleasure. Any suggestion that the tables could be turned leads to fear.

“The world turned upside down, the weak given power. The revenge they could justify if they had the means at their disposal. A life would not be long enough to repay the debt.”

At some level these men know what they are doing is wrong yet they suppress such thoughts when they can get away with their actions. Roles are ingrained; challenging them can be life threatening.

“She has grown up as a woman. She has been taught to flatter, to please, to depend, to give away, to make herself small and quiet. She has been told to be soft so that men will always have a means by which they can hurt and control her, that ring through the nose which men call femininity.”

The beliefs of the ancient world are referenced with their superstitions and blood sacrifices. When death seems near it is to within, rather than a deity, that the victims turn.

“Perhaps this is what all prayer is, when the ceremony and the theology are peeled away, a serious stillness in which one talks quietly to one’s own best self.”

Such best selves are ultimately selfish. The love so strongly felt is for how the recipient makes the lover feel. When faced with the power of wealth and social standing one’s best hope is to be overlooked, somehow hidden from the notice of those who seek to control behaviour for personal benefit.

“the wisdom that comes with knowing you could be prey”

One wretched scene involves young boys and their burgeoning need to prove themselves strong and fearless. Artistry is recognised then sacrificed, its value secondary to a more primal need when amongst peers.

After the adventures, the risk and the losses, there must be a denouement. It felt contrived although may well be based on the stories from which this one has grown. The author offers alternatives while pointing out the difficulties these would bring. Happy ever after is not how life is lived.

There is a short digression that explores an afterlife in which comeuppance is not as expected. It added to a tale where death, or near death, is a perpetual driver. The men portrayed rarely acknowledge the damage caused by their behaviour. When faced with consequences, regret is for what is now happening to them.

Any Cop?: The layered and interwoven structure works well in drawing attention to key issues and bringing accepted horrors, particularly in the ancient setting, a contemporary empathy. The fluid writing offered moments of insight. Although at times unsettling, this was an enjoyable read.