This is my local canal network. I have walked what remains and is accessible in my area, aided in my search for remains of the waterway by historic maps put online by the National Library of Scotland (a fabulous resource for walkers interested in social and economic history). The photographs and associated text in this book were therefore of particular interest.

Opening with a brief history of the Wilts and Berks Canal, what follows is a collection of historic photographs that offer glimpses into key features along the waterway’s sixty mile route. This canal ran from Abingdon (where it joined the Thames River) to Semington (where it joined the Kennet and Avon Canal). Much has fallen into disrepair after a century of neglect although sections are now being restored by volunteers. If it is to become navigable again there will be a need to reroute around a number of modern developments.

The photographs in this collection are divided into nine geographic sections. These include branches built to link the canal to the market towns of Calne and Chippenham, and also the North Wilts Canal that ran from the Wilts and Berks Canal in Swindon to Latton, where it met the Thames and Severn Canal.

Many of the images included are from the twentieth century. They show not just the waterway but also associated bridges, locks and buildings. These remained long after the canal was abandoned. Some are still in existence.

The first boat completed its through voyage along the Wilts and Berks Canal in 1810. By 1874 the nearby GWR railway had taken much of the canal’s trade, and shareholders wished to close or sell. This was not permitted. Business struggled on for almost three decades before a section of aqueduct near the village of Stanley collapsed, the water draining into the Marden river. This damage was not repaired. Conspiracists may ponder if the damage was deliberate. Remains of the structure can still be seen today.

The degenerating waterway became a concern in certain areas due to the smell of stagnant water and the rubbish that was dumped in the now unused ‘stinking ditch’. Over time locks and bridges were dismantled to provide building materials. Sections of the canal bed were filled in, ploughed over or built upon. Where available, the photographs show these changes.

The author has annotated each photograph providing context and further information. With restoration work ongoing those interested may check his website which contains links to updates.

As the title suggests, this is the second photographic history of the Wilts and Berks Canal that the author has curated. I would now be interested in acquiring the first. 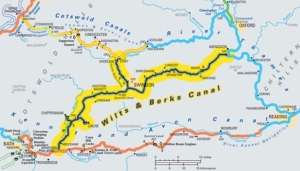 Wilts and Berks Canal Revisited is published by The History Press.

My copy of this book was given to me by my son.