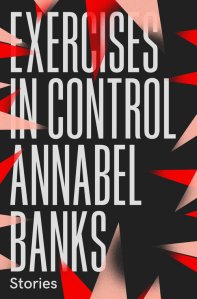 Exercises in Control, by Annabel Banks, is a collection of a dozen short stories from an author whose writing style brought to mind that of M. John Harrison, although these are neither fantasy nor science fiction. The stories have an unsettling and elusive quality that requires the reader to delve beyond what is obvious and engage with characters who are slippery and complex. There is an undercurrent of violence that manifests in actions against the narrators and those they encounter.

The collection opens with an impressive tale titled Payment to the Universe. A cleaner is working alone in deserted offices. Against instruction she enters a room and must make a decision about what she finds there. The sparse prose conveys her reasoning and packs a punch.

I was less impressed with Susan Frankie Marla Me. A woman describes outings with friends and the copying of behaviours that alter depending on who she is with. My aversion likely stems from the fact that I couldn’t warm to any of the characters or what they were doing in each situation.

Exercises in Control is a strong story but contained an upsetting element of animal cruelty that I would prefer not to now have in my head. A train station guard is watching a woman who he regularly sees on his shift. Curious to find out how she reacts, he stage manages a scenario and then observes from his unseen vantage point. His apparent lack of feeling, other than to satisfy his own needs, is shocking.

Rite of Passage recounts a weird date on a beach in Cornwall.

It is one of several stories that detail people behaving strangely. Men think violent thoughts that they sometimes act upon. Women self-harm in a variety of ways. If the stories are about self control – or its deliberate absence – then this comes with a need to exert power, to push against the strictures that family or society attempt to impose. There is a lack of hope, a struggle to cope, in many of the lives depicted.

Limitations turned me off with its sexual description in the opening lines – a man looking forward to seeing a woman again because of “how wet she gets.” Few of the men featured in any of the stories are given likeable traits.

Free Body Diagram features a woman who hitchhikes as a means of courting danger. She is a serial dater with no interest in forming a relationship. I enjoyed the ambiguous ending.

The Higgins Method is a violent interpretation of My Fair Lady. It has a quietly inserted side thread on how we treat and judge celebrities.

I enjoyed the oddness of Momentum with its suggestion of something inexplicable in a local man’s homemade box of tricks.

The oddness in With Compliments was more difficult to navigate. The character jumps lost me in places – who was who – although several of the scenarios resonated.

Harmless offers a wickedly delicious comeuppance for a man who tells a random woman he encounters to smile, expecting to be paid attention. I felt guilt at my feelings over the outcome and the woman’s reaction.

A Theory Concerning Light and Colours has an intriguing premise and unnerving ending but didn’t entirely hold my interest.

The closing story, Common Codes, features a man who wishes to impress a woman and ends up losing control of a lie he tells. I wondered what would happen next.

Seven of these stories have previously been published in literary magazines with some nominated for awards. From what I had heard of the writer I expected to enjoy her work. Perhaps it was this that led to my ambivalence with the overall collection. There is much that is admirable in the style and structure of the writing, which has obvious power and depth. Nevertheless, I struggled to engage with too much of the development. The inherent violence and relentlessly flawed character traits marred my enjoyment. A book that may benefit from rereading.

My copy of this book was provided gratis by the publisher, Influx Press.