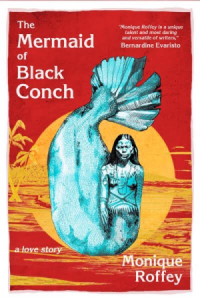 The Mermaid of Black Conch, by Monique Roffey, is set in a tiny Caribbean village where the history of occupation and slavery still rubs raw amongst residents. Many are of mixed race and interrelated, with few secrets possible. Much of the land is still owned by a woman of English descent.

The story is told from the point of view of a local fisherman, David Baptiste. It opens in 1976 when David goes out on the water early to smoke ganja and strum his guitar while waiting for a catch. A mile or so out from the bay he drops anchor. It is here that he first spots a mermaid.

A few weeks later two Yankees bring their whaler to the island for a fishing contest. They hire local men as crew. David is out on his boat, whose engine the mermaid now knows and is drawn to. Perhaps it was this that distracted her from the potential danger. After a fierce battle with the hunters she is caught, much to the dismay of the villagers. The Yankees see nothing but the money to be made from selling their rare catch for public display or research. Along with the fish landed by other contestants, the mermaid’s injured body is strung up in the bay. It is here that David finds and rescues her. His actions will change everything. The mermaid had once been a young women but was cursed by jealous wives whose husbands were drawn to her dancing. She carries this curse, and jealousy stalks her once again.

David is no stranger to women but has never felt attracted to one as he is to the rescued mermaid who is now transforming back into human form. He tries to hide her in his home but privacy is not something his neighbours respect. What is happening comes to the attention of Arcadia Rain, who lives in the big house on the hill with her deaf son, Reggie. When Reggie forms a bond with the mermaid, Arcadia offers to help David by teaching her to speak their language.

Much of the tale is written in the form of a journal in which David looks back on these momentous events from his current perspective in 2015. Melancholic undercurrents prepare the reader for what are sad yet inevitable developments. On a small island with limited prospects there will always be those willing to act cruelly if they believe there is money to be made. Add to the mix a mean and spurned potential lover and events are unlikely to go well.

The narrative includes sections written in the local vernacular. The mermaid’s thoughts are presented in a plaintive, sing song style. Along with evocative descriptions of the island and local culture, the reader is transported to a place whose history is gradually revealed. The mermaid’s recollections along with the underlying resentments of current residents expose the oppression Arcadia Rain represents.

This is a vibrant, multi-layered and beautifully written tale that will leave the reader longing for man to behave with more compassion. The fully rounded characters bring to life the conflicting dimensions of decisions and behaviour – that good and bad can go hand in hand.

My copy of this book was provided gratis by the publisher, Peepal Tree Press.