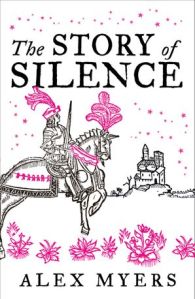 The Story of Silence is based on a thirteenth century poem about Silence, the only child of the Earl of Cador. The Earl was promised the fiefdom of Cornwall – but only if he had a son who could inherit. Desperate, the Earl decided that his firstborn child, regardless what sex they were born, would be raised a boy – and thus Silence, by nature female, was raised as a man. The author, Alex Myers, is a transgender writer and teacher, and this book functions as both a fascinating history and an examination of what gender is.

The protagonist, Silence, is a highly compelling individual. They’re one of the genuinely nicest characters I’ve ever read about, and their struggle with their gender identity is poignant and compelling. Silence dreams of being a knight, but their father is terrified of being found out and tries to hide them away with only their dreams, their nanny, and a priest to guide them. I was rooting for Silence throughout – and whilst it’s always obvious that the reveal is coming, plenty happened in between to surprise me, and the ending took a very different direction to what I expected – one that I greatly appreciated.

This is marketed as a fantasy novel, but I’d call it pure historical fiction. There are elements of magic – with Merlin making cameo appearances – but this is essentially a bard’s tale about a famous Knight who happened to have been born in a typically feminine body. The writing is period-appropriate and chronicles the story well. The primary setting of Cornwall is beautifully described, but the writing doesn’t wax lyrical, focusing on Silence and their life rather than anything happening around them. None of the characters, save Silence, are particularly three-dimensional, but this doesn’t detract – it’s Silence’s story, and the others are simply props. Delving deeper into characters like Albert would have changed this from a bard’s tale into something else, and I don’t know that it would have worked so well.

As a cisgender person, I don’t want to comment too much on Myers’s portrayal of gender here, but it was certainly fascinating to read and seemed from an outsider’s perspective to be very well done. Gender divergence is not a new phenomenon, but historical accounts of it are rarely discussed – how Myers presented it here was excellent and, albeit fictional, very believable. I would be interested to now read the original poem and see how much artistic license the author took in his portrayal.

Overall, this is a recommended read. It’s a very easy to read book, weaving an enjoyable tale of quests and minstrels and jousting, with an undercurrent of an issue that’s rarely portrayed in fiction. Everyone who enjoys historical fiction should appreciate this, and hopefully it’ll give them something to think about too.

One comment on “Robyn Reviews: The Story of Silence”