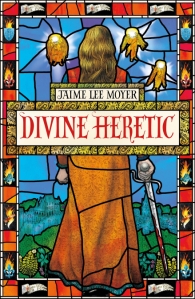 Divine Heretic is the story of Jeanne d’Arc, more commonly known in the UK as Joan of Arc. Jeanne is a saint of the Roman Catholic church for her role in the Hundred Years War, a battle between the French and the English for dominion over France. Jeanne claimed to have visions of angels – specifically the Archangel Michael, Saint Margaret, and Saint Catherine – instructing her to support the incumbent King Charles VII in his quest to reclaim France. Her actions aided him in ascending to the throne, but she herself was captured by the English and burnt at the stake for witchcraft.

The book more or less follows the common story, but diverges on Jeanne’s opinion of the angels. Here, the angels are more like demons who plague her. It starts with their first visit, when Jeanne is five, and follows as they torment her, cursing her with pain and horror for her family until she agrees to carry out their will. They claim she is the fabled Maid, but Jeanne doesn’t believe herself to be the Maid – she’s just a peasant girl. As time passes, the control these demons have over Jeanne appears to wax and wane – but they’re determined to ensure she fulfils her destiny no matter what the cost.

Jeanne is an intriguing protagonist. She’s exceptionally devout, but equally sure that these beings are not divine. She’s a strong character with clear desires – even when she seems powerless to achieve them. Her life is regularly awful, and she hates the demons she blames this on with burning passion. There’s a certain level of detachment between her and the reader – this seems to be common in historical novels – which can make her hard to connect with, but it’s hard not to sympathise with her inability to control her own life.

Unfortunately, the secondary characters are particularly two-dimensional. Her Grand-mere is an intriguing character – chosen to be the Maid before Jeanne until circumstances prevented her from fulfilling her destiny – yet this thread, and the impacts on her character, are never explored. Jeanne’s sworn protector, Ethan, also has brilliant potential – mixed-race in an era and place where that’s uncommon, he’s a strong knight with a heart of gold. However, he’s reduced to the cardboard love interest, never doing anything for himself. This would be a much stronger story if anyone except Jeanne felt like a real person.

I enjoyed the plot – despite telling a well-known tale it maintained interest, with less predictable twists thrown in alongside the predictable ones. However, I disliked what was done with the ending. It felt unnecessary – after the darkness of the rest of the book, throwing in fluffiness felt trite.

I struggle with historical fiction more than many other genres because it’s often written in a very detached style, and I need to connect with the characters to really enjoy a story. This is no different. It’s well-written, but the impersonal nature of it lessens its appeal. Fans of historical fiction and plot-driven novels likely won’t mind this, or may even prefer it – but I want it to delve deeper.

Overall, this is a solid historical fiction novel about an interesting, well-known figure that takes a slightly different spin to what is often portrayed. Recommended to fans of historical fiction, especially Roman Catholic history, and strong female characters.