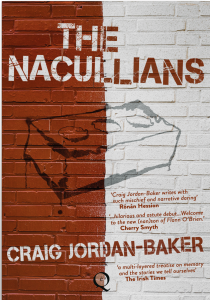 The Nacullians are three generations of a working class family who live in an ex-council house in southern England. The city they inhabit is across the water from the Isle of White. The family took a ferry to the island once but then weren’t sure why.

Nandad and Patrice escaped Northern Ireland in the 1950s, for reasons shadowed by time and later told only for effect. They subsequently had four children, two of whom survived to adulthood. Bernard followed his Dad into the building trade, apprenticing as a bricklayer. Shannon fell pregnant when she was fifteen thanks to the attentions of the local, married, chip shop owner. Her son, Greg, is the only Nacullian grandchild.

The family are introduced in the excellent opening chapter. It runs at breakneck pace and is almost vicious in its humour. Remaining chapters then provide explanations, focusing on key events in the lives of family members. There are interludes to enable the reader to understand the city and how it helped shape its working class inhabitants’ characters.

“Some people here in the city don’t have a sufficiently well-developed sense of identity, so they have to hate someone to get a sense of who they aren’t”

The story is very far from those more typical tales of family pulling together, or even the misery stories of hunger or abuse. The Nacullians go about their lives with habitual acceptance, displaying disdain for each other more often than love in any guise. When, later in her life, Shannon loses the ability to talk in any understandable way due to a series of strokes, it becomes apparent that none of the family have ever understood each other anyway. Communication is limited to necessity. Anything further – any show of emotion beyond irritation – would likely be met with blank incredulity.

The menfolk are determined to be what they consider ‘real men’. They are casually racist, sexist and brutal towards outsiders. The women expect nothing better, only rarely rocking the boat by desiring change. While habits and behaviours may be unpleasant, what is presented is done with a dark humour and sharp realism.

The writing is both piercing and entertaining. It is hard to admire the individual Nacullians but still the author evokes a degree of sympathy. The story is told by a narrator who keeps their distance, making no attempt to read thoughts or delve into emotion that is not obvious from action. This detached style works well as the characters would likely be horrified at the idea of being seen as soft or compromised. Survival has required personal strength akin to the bricks of which their small house is built. Sometimes these have to be thrown at perceived enemies.

The tale spans the decades from the 1950s to the present day. The Nacullians drift through their lives with little energy or appetite for change. Politics and the wider issues of the day go unmentioned. Their interests are insular, habitual and rarely questioned.

Despite discomfort at some of these attitudes – redolent of many, however horrifying Guardian readers may find this – the story remained wry and compelling. There is a warmth towards his subjects alongside the author’s uncompromising depiction. It is a reminder that not everyone believes their lives require improvement.

My copy of this book was provided gratis by the publisher, époque press.