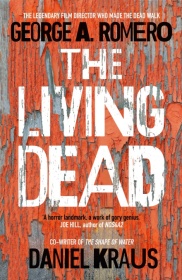 The Living Dead is a zombie novel started by the filmmaker George Romero, responsible for some of the most well-known zombie films including ‘Night of the Living Dead’ and ‘Day of the Dead’. After his death, it was given to the novelist Daniel Kraus – a lifelong Romero fan – to finish. Having never seen a single Romero film I can’t say how accurate the novel is to Romero’s vision, but I can say that it’s an epic, sprawling homage to the zombie genre, filled with musings on humanity and what it means to live and die.

The book is split into three parts – one right at the start of the zombie epidemic, one very short section as it develops, and one fifteen years later as humanity regroups. The first section takes up more than half the book. It jumps between a variety of characters in different situations – the pathologists who found the very first zombie, the teenager skiving school in her trailer park only to be surrounded by the undead, a news crew trapped in their studio, several members of the US navy on a boat off the coast of Mexico. Each adds a unique element, providing a fresh voice and perspective and showing the breadth of responses to the crisis. As time goes on, their stories start to intersect, unlikely people coming together in a way only a crisis can precipitate. The final section groups all the survivors in the same place – but Romero never believed in books having happy endings, and the ending is more a comma than a full stop.

While the novel is US-centric, rarely touching on anything happening outside, the characters are designed to show the breadth of humanity. Some are likeable, some tolerable, and some downright horrible to be in the headspace of. Highlights include Karl Nishimura, the US naval officer unexpectedly having to command a crisis when all he wants is to go home to his husband and children; Etta Hoffmann, the statistician determined to record everything for the history books; Charlene Rutkowski, the pathology assistant who finds herself hiding out with the married boss she’s been in love with for years; Chuck Curoso, the Face of WNN news network tasked with being the last news reporter on air. There are even rare glimpses inside the heads of the zombies – these are fascinating, with zombies seeing themselves as many bodies of a single consciousness rather than the individuality of human beings.

The main problem with this book is its scope. While it all comes together eventually, the first half is spent getting to know a couple of characters only to suddenly jump to someone completely different. In a way, this is less one large novel than several shorter stories, all of which weave in and out of each other as characters cross paths. It’s hard to remain interested and invested when the perspective changes with no explanation. Once each character is established, the book starts to flow much faster, the story coming into its own – but its possible the beginning would have worked better with either fewer point-of-view characters or a different structure.

Overall, this is an excellent book. The plot is gripping, the writing brilliant, and the characters varied and fascinating. The ending is an uncomfortable read but appropriate to the tone of the book. There are flaws, and I question if it needed to be over six-hundred pages long, but it’s a book worth persevering with. Recommended to all fans of zombies, apocalypse novels, and those interested in the psychology of human nature.