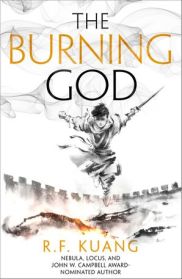 ‘The Burning God’ was one of my most anticipated releases of 2020. RF Kuang has been one of my favourite authors since her first book, ‘The Poppy War’, so I couldn’t wait to read the final instalment in the trilogy. As advance copies started to go out, praise poured in, so I went into this with sky-high expectations. It proved to be an absolutely excellent book – but for whatever reason, it just didn’t click with me quite as well as its predecessors. It was almost perfect, with gorgeous language and a fantastic plot, but there was so much hype I just expected a little bit more.

“They weren’t humans, they were stories; they were paintings winding their way across wall scrolls.”

‘The Burning God’ follows Rin, a Speerly shaman, as she tries to wrest her country back from the control of foreign invaders (the Hesperians) and defeat her mortal enemy (and old classmate) Nezha in the process. She’s already razed an entire island to ashes and will stop at nothing until victory is hers. However, the more she becomes captivated by power, the more dangerous she becomes – and in the end, even her anchor and best friend Kitay might not be enough to save her.

Rin is the ultimate morally grey protagonist. She’s stubborn, determined, and never admits she’s wrong. Her military training and shamanism have shaped her into a weapon to the extent that she doesn’t know how to be anything else – or when to stop. Kuang’s writing is masterful, making Rin into a character you want to root for, then carefully weaving her journey together so you don’t notice her falling to the wrong side until she’s already gone. Even when she commits the worst atrocities it’s impossible not to feel sympathetic towards her – a real achievement.

“They were at the stage of war where every choice would be monstrous, and the only question now was which choice kept them alive.”

Kitay is a lovely, sweet character, but here she shows more steel than he has before. It’s easy to forget that he’s a solider to – in this book, his ruthless streak comes out to play. Kitay tries to keep Rin from going too far, but he’s just as willing to play the game as everyone else. I enjoyed seeing a different side to him and Rin’s reaction to that.

Nezha is a far more peripheral character in ‘The Burning God’ than I expected. In many ways, this is realistic – war is rarely fought between the leaders, instead being fought by the cannon fodder – but I wanted to see more of him.

“She’d spent so long fighting by his side, she had to make herself remember how to hate him.”

This is a true military fantasy trilogy, and this is a more plot-driven novel than its predecessors – which I think is why it’s my least favourite. I love character driven stories, but here the characters have already been developed and it’s the plot that drives everything forward. Coupled with the fact that I’d already guessed the ending, it didn’t pack as much of an emotional punch as I expected. The plot is excellent and the ending appropriate, and for many will be incredibly emotional – but there wasn’t enough character build-up in this for it to reach those heights for me. It might have worked better if I’d reread the first two immediately before to immerse myself in the characters.

RF Kuang is an exceptional writer, and from a technical perspective this is her best novel yet. The writing is gorgeous, painting a beautiful – if at times horrible – picture of everything that happens. Every moment is visceral and real. ‘The Poppy War’ is a fabulous book but clearly a debut – this is a book written by a true master of her craft.

“She knew very well how it felt for a chasm of guilt to eat at her soul, to try to sleep when an abyss of vengeful souls whispered that she’d put them there.”

Overall, this is an excellent book concluding a fantastic trilogy that I’d recommend to every fantasy fan. It didn’t quite meet the very, very lofty expectations I had for it – but that’s a sign of how highly I value RF Kuang’s writing. I’m looking forward to reading what she writes next.