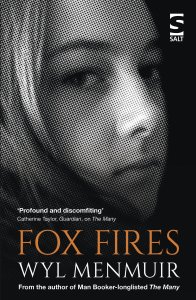 Fox Fires, by Wyl Menmuir, is both moving and, in places, chilling. It explores family and loneliness in its depiction of a mother and daughter relationship. A key character is the setting, and the author conjures it skilfully. The importance of belonging, of being wanted and accepted, includes choosing for oneself a harbour in which to exist.

The story unfolds in a coastal city-state – O – that has only recently been reopened to visitors. A curfew remains in place. The locals are wary of divulging information to strangers. They know the authorities remain watchful; spies are everywhere. The city was built as a labyrinth to confuse invaders, although it has suffered many wars from without and within. It has its own language and distinctive physiognomy.

The protagonist of the story is Wren Lithgow, the nineteen year old daughter of Cleo, a renowned concert pianist. They live a peripatetic lifestyle, spending time in the major European cities where Cleo performs. Wren was raised in apartments that held the family furniture and other belongings, transported and arranged to conjure a feeling of home wherever they may be. As a child she was left alone, or cared for backstage by anyone available. Now she has become part of the team that keeps her volatile mother grounded and capable of playing.

Wren knows only the barest bones of detail about her father. Cleo let slip several years previously that her daughter was conceived in O. Wren found a photograph of her mother with a man, taken in the city. She possesses a mechanical doll from the place. When her mother agrees to perform in O – the money offered being too generous to turn down given their current circumstances – Wren determines to search for her father, or at least find out what became of him. Cleo continues to refuse to answer questions, dismissing her daughter’s curiosity with contempt.

Having spent her life moving from place to place, Wren is capable of picking up new languages quickly. She also discovers that she looks like O’s native people. Cleo demands, in her usual imperious manner, that Wren remain in their apartment, carrying out tasks that will be specified via her pager. If she is to find her father, Wren knows she must do so independently. It will be the first time she has left the often toxic cocoon of her mother’s attempts at care.

Setting out alone to discover the city, Wren finds a library she hopes will aid her research. She also encounters an English speaker, and risks getting to know him better. From here her quest appears more attainable, although what she discovers about O and its culture suggests her search must be carried out under the radar. Trusting anyone in a place subdued by constant surveillance proves difficult.

The authorities in O wish to encourage tourism – to project an image – but are also wary of tolerating change in locals’ freedoms. Cleo understands the inherent dangers, and tries to reel her daughter in.

The author builds elegant if dark layers within the story that enable the reader to delve in deep, although it may also be read straight. Wren is a determined young woman, she is a will-o’-the-wisp, she is an embodiment of the city.

Much as I enjoyed the author’s debut, Booker longlisted The Many, this tale has a more fluid and accomplished feel. There are similarities in the shadowy undercurrents, and the skill with which threads are woven together. Menmuir has spun a fascinating web that captured this reader’s attention fully. I was left sated while still thinking through issues raised.