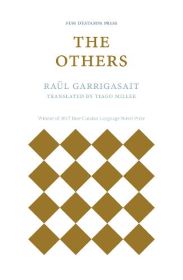 The Others, by Raül Garrigasait (translated by Tiago Miller), is set across two timelines. It opens in a Berlin library in roughly contemporary times. The narrator is seeking information on Prince Felix von Lichnowsky, a Prussian gentleman from the nineteenth century whose memoirs he has been commissioned by a small publisher to translate. In amongst the papers he is provided with is a misplaced file on someone else, Rudolf von Wielmann. This manuscript contains incomplete commentaries – diary entries – that intrigue the narrator. The earlier timeline is his attempt to pull together Wielmann’s biography from when the young gentleman was in Spain during the same period as Lichnowsky.

“flanked by his mother’s detached benevolence and his father’s absent severity, he had never had to shoulder a single burden in his life”

Wielmann has left his privileged life in Berlin, the capital of Prussia, at the behest of his father. It is considered that gentlemen from a family of their standing should achieve something of note in their lives. Armed with a letter of recommendation from an uncle – intended to introduce him as a man of consequence, thereby not putting him in avoidable danger – Wielmann intends to join those fighting the Carlist Wars in Spain.

From what I can gather from the story, the Carlist Wars were a series of civil uprisings in which small armies fought to maintain Order – as imposed by the Inquisition – against liberals who wished to introduce a new form of central governance. The contenders each fought to establish their claim to the throne. Despite not being particularly religious, Wielmann was willing to fight on the side of legitimism and Catholicism.

Wielmann catches up with the army of the monarch, Don Charles Maria Isidre de Borbó, as it enters the half-destroyed municipality of Solsona. His interactions with the king lead to him being given orders to remain after de Borbó and his contingent move on towards Madrid.

“Traipsing the solitary streets, he pondered how receiving an order that, for the time being, didn’t require him to do anything or, rather, required him to do nothing, wasn’t a situation altogether different from the lethargic life he had maintained his entire adult existence in Berlin.”

Wielmann befriends a local doctor, Miquel Foraster, visiting him regularly at his home to discuss topics of note and play Beethoven on the piano. Wielmann is living in basic accommodation, housed by a widow who provides his meals silently with little other contact. How he ended up staying here, and for so long, remains opaque. Aware of his family’s expectations, Wielmann is unsettled by the emptiness of his days.

“Not even in the midst of this invisible war that he was theoretically participating in had he been required to do anything even remotely worthy of mention.”

The writing has, at times, elements of the uncanny but is mostly as playful as it is poignant. The actions and interactions depicted lay bare the mundanities of life despite a desire to find meaning.

Episodes recounted are often sensory. The music becomes other-worldly to those who listen. A meal containing mushrooms evoke the forest in which they grew. A carnival party depicts the decadence of participants.

“Far from home, our sense of shame lessens its clutches on the reins.”

About a third of the way through the book I realised I remained confused by what was happening and the apparent lack of direction. By returning to the beginning and flicking through again, the narrative began to make more sense. In the contemporary timeline, looking back through the lens of known history, more depth may be added to Wielmann’s tale.

“For the most part, Catalan troops still lived and fought in a half-primitive state”

The importance – or should that be vanity – of principles is explored alongside the futility of war. The denouement is fitting but searing.

One element of the text that presented me with some difficulty was occasional dialogue that had not been translated into English. Perhaps readers are expected to know a smattering of French – my guess as to the language. I found this a snag in the flow of the story – a small niggle but one I raise as a reminder that not all of us are linguists.

A slow burner of a tale that nevertheless offers a window into a time period and place I knew nothing about previously. The lightness of the writing style belies the seriousness of topics presented. Stick with it for what becomes a lingering and satisfying read.

My copy of the book was provided gratis by the publisher, Fum D’Estampa Press.