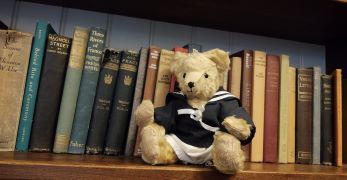 Edward has been on an adventure this month, which pleased him greatly. With restaurants permitted to reopen after lockdown, enquiries were made at his local pub. Hurray! Restrictions have been lifted and customers are being made to feel welcome again. Younger bearer decided it was time to go out for his delayed celebratory birthday meal. Edward likes birthdays.

Always eager to be appropriately dressed, Edward chose carefully based on the heavy rain that fell on the day selected for the outing. Thankfully, by the time everyone was ready to walk to the venue, clouds had cleared.

The friendly waiting staff offered a table by bookshelves, giving Edward an excellent vantage point from which to observe proceedings. Drinks were ordered along with a sharing platter. Edward was not entirely convinced this was for him. 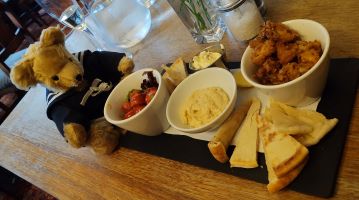 After a lengthy wait, during which Edward had time to peruse several books, more appealing portions were delivered. These looked very tasty. 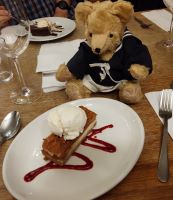 From chocolate brownie, biscoff cheesecake and sticky toffee pudding, Edward chose the brownie. He had to try quite a lot of each before coming to this decision. They were all delicious.

As well as eating out, Edward has welcomed two new friends who came to live with him. 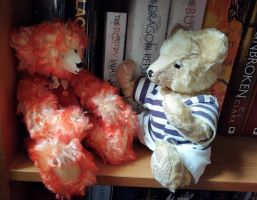 Bungle is a rescue bear, spotted in a charity shop window and brought home to comfort youngest bearer who had been feeling a little down. Edward has never been able to understand how loyal and undemanding bears end up in such places but is pleased that Bungle – who provides excellent cuddles – has now been given a new forever home.

Oskar is a one of a kind bear from Susie’s Button Bears, purchased to celebrate a bearer’s new job. He mostly lives on her bookshelves along with some other bears from her extensive sleuth.

Edward hopes you are all keeping as well as is possible in these trying times. He is looking forward to further adventures while his bearers remain free to take him out and about again.

7 comments on “Edward Explores: Eating out at his local pub”