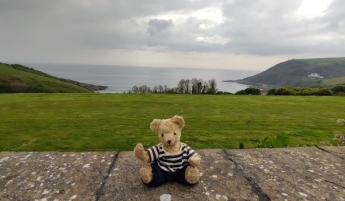 Readers may remember that, back in March, Edward kindly consented to partake in some modelling for photos to be included in a hotel review. He proved himself so skilled at this he was asked to repeat the experience on his latest adventure, to beautiful Cornwall. This time, rather than helping to celebrate a birthday, he was assisting in the celebrations for a wedding anniversary. You may read the subsequent review of the hotel he stayed in, at Talland Bay, here.

Edward entered the county via the Tamar bridge. As well as a road bridge, there is a railway bridge. Although Edward was travelling by car this time, he remains fond of trains and was pleased to observe one as he read about the history of providing means of crossing the river. 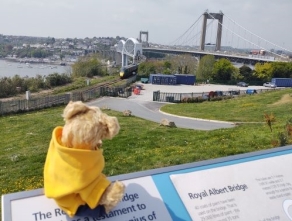 Having arrived at his destination, Edward was whisked off for a bracing coastal walk. This time of year is bluebell season, and he stopped to admire the many more unusual white specimens growing along the verges.

On his return to the hotel it was time for a little sustenance. Dinners included delicious puddings that he was eager to sample each evening.

An early start was required on Saturday morning as Edward’s bearers wished to take part in the Eden Project Parkrun. Edward waited patiently for them to cross the finish line that they may all enjoy breakfast together. He wasn’t convinced by the bacon butties they seemed to be enjoying but approved of the small snack provided for him.

There was then time to look around the landscaping and biomes – complementary entry was offered to runners and their support crew. Edward was pleased to spot a bee, even if it was rather large and inactive, as he has read they are vital yet endangered. He also took time to admire the unusual plants growing in the areas visited.

Next on the agenda was a visit to the Lost Gardens of Heligan, which proved easier to find than the Eden Project had been. Edward wondered if the friendly giant rising from the earth to greet him had a friend who had lost their hand. He contemplated this over the tasty cookie provided to replenish his energy levels. 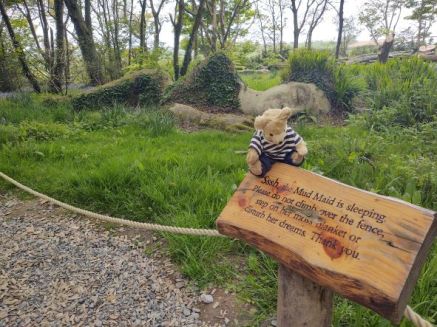 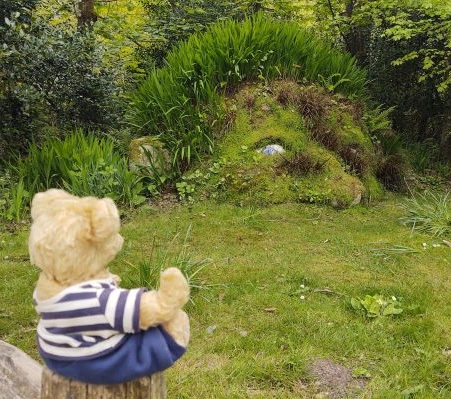 It was a tad damp on the Sunday but Edward was brave and agreed to climb out of his waterproof snooze bag to pose on rocks as his bearers looked out over Looe island. As a reward he was given a bag of Cornish fudge, freshly made on premises in the town. 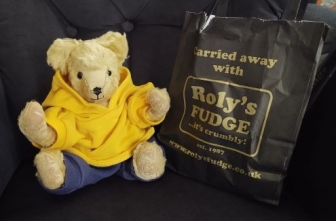 The final day held the promise of a fine afternoon tea before journeying home. Edward accompanied his bearers on a woodland walk that they may build up an appetite for this treat. Although excited to join such adventures, teddies always have sufficient space in their tummies for cake. 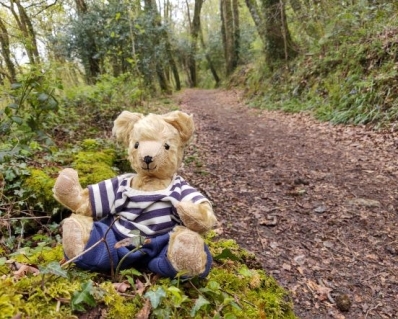 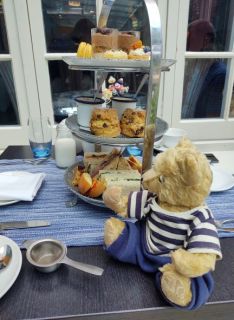 Edward enjoyed his few days in Cornwall immensely. As he bade farewell to the friends he had made there were quiet words with the balloon bear at reception. We hope they realise how far it is to Wiltshire and no risky journeys are attempted for a reunion… 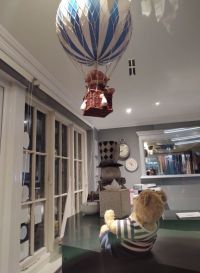