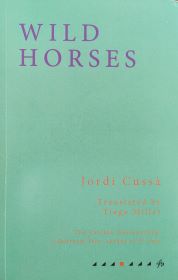 “When you’re an addict and you need your drug, you don’t see or consider the peril you’re walking into”

Wild Horses, by Jordi Cussà (translated by Tiago Miller), tells the story of a group of drug addicts and dealers in 1980s Catalonia. It is based largely on the author’s own experiences as a heroin addict and dealer. Written in factual but engaging prose, the madness and euphoria of drug taking are captured without glamorising. Many sexual encounters are mentioned but most avoid the usual gratuitous detail.

The episodic structure is effective in retaining engagement as the rolling cast of characters intermingle across the decade. Timelines shift back and forth, narrators change, but it is the numerous and varied experiences described that take centre stage. Each chapter opens with a few lines from an appropriate song lyric. This really is a story of: sex, drugs, rock and roll.

The book opens at a funeral. Lluïsa is being buried having finally succumbed to AIDS and methadone abuse. Lex, the main although not only narrator, attends with a group of their mutual, drug addicted, lovers and acquaintances. Lluïsa’s brother objects to their presence and a violent altercation ensues. Such violence and death are regular features in the unfolding tale.

The author doesn’t baulk at what happens when drugs fuel daily existence but neither does he push the small details. Things happen and then he moves on to the next thing. There are highs and lows, murders and suicides. Lovers are taken and then abandoned for whoever comes next. It was satisfying to read of the women pleasing themselves despite the jealousies and attempted possessiveness of the men – who thought little of bed hopping themselves.

“Afterwards came her dignified, calm response: her life and her genitals were hers, and it pleased her (or had pleased her) to share them with me. I understood, I even downright defended it on a rational level … I saw suddenly that she’d never be Mine, that she never had been.”

There is a certain amount of sordid, drug fuelled, sexual imagery. I questioned some of the scenes described from a female point of view that appeared, to me, far fetched. That the author is a male is telling here.

Despite the regular injuries and deaths, it is hard to garner sympathy for the characters – although this is not asked for. Risks are recognised and choices made. If addicts are generally thought of badly by society, it is clear to see why in this tale: most driving is undertaken while drunk and high; occasional robberies help fund the various habits; a breast feeding mother takes heroin; children die of inherited complications; money made dealing, to pay off debts, is blown on benders. And yet somehow the story humanises the young men and women featured. It is not just drug addicts who choose suicide.

The writing turns meta at times, implying the author is Lex. His friends know he is writing a book about them and encourage this. They do not encourage his attempts to get clean.

“I was fed up of running up and down like a frantic mosquito, risking my life thrice daily out of the ephemeral excitement of possessing it fully every second.”

Reading is akin to watching a car crash. The drivers know they are dicing with death, have watched others die before their time, but remain drunk on the thrill of the ride.

Although chronicling several interlinked life stories, so many similar episodes were recounted the tale became a tad repetitive towards the end. Highlights were chapters that looked at living from a different angle, although few of these offered happier endings.

A searing and unflinching window into the world of heroin addiction in which alcohol and cocaine abuse appear almost benign in comparison. A very human story of selfishness and risk taking. An impressive if disconcerting literary achievement.

My copy of this book was provided gratis by the publisher, Fum d’Estampa Press.