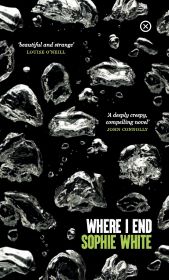 Where I End, by Sophie White, is set on a small island off the coast of Ireland. Fewer than two hundred people live on this remote outcrop. They speak a dialect of Gaeilge that is understood by few incomers. The locals harbour deep seated superstitions that result in some disturbing practices.

The island has a grey beach at one end and sheer cliffs at the other. In between are houses built from the local stone. The mainlanders marvel at the historic culture retained on this isolated backwater, trying to harness it for monetary gain. The remains of a derelict woollen factory attest to one such failed enterprise. This building is now to be turned into a museum and art gallery in an attempt to attract tourists. The locals regard these interventions with disdain.

Livings are mostly eked out from the sea either through fishing or working on the boats that ferry the few visitors. Learning to swim is frowned upon. When the sea takes lives they are mourned but the deaths accepted.

The story is narrated by nineteen year old Aoileann who was born and raised in a dark and cold house, the last dwelling before the cliffs are reached. Her days revolve around caring for her damaged mother, ‘the bed-thing’. Aoileann’s grandmother is the only person to pay her any attention, and that is as scant and silent as the older woman can get away with. The locals actively avoid the girl, believing she is cursed. Her father visits once a month, staying just one night before returning to the mainland. Aoileann resents the extra work his visits create, a show put on that he may pretend all is as it should be despite the glaringly obvious issues with his wife’s physical and mental health.

The author skilfully weaves the backstory of this family and place around the day to day chores that must be undertaken to keep the mother alive. Despite questions, eavesdropping, and searches of the dwelling, Aoileann still does not know what happened to create the being her mother now is. Photographs suggest her parents were once happy. Her grandmother closes down entirely when asked to explain.

Having set the scene, a catalyst for change arrives in the form of an artist, Rachel, and her newborn baby. Aoileann is mesmerised by this young women, doing what it takes to ingratiate herself into their lives. The reader has been fed snippets of some disturbing behaviour from Aoileann’s childhood. These now manifest in her treatment of the new residents. As someone who has never been loved by a mother, Aoileann is desperate for Rachel to grant her some of the attention she observes being offered so freely to the child.

The sense of foreboding is palpable throughout. This plays alongside the explicit horror of Aoileann’s mother’s situation, revealed gradually but with little reasoning explained until later in the tale. By the end the reader will be recoiling from all that has happened and then been perpetuated. The denouement is still shocking despite the foreshadowing.

A masterclass in creating a darkly disturbing character and sense of place. A unique and brilliant read that I couldn’t put down, reading it cover to cover in a day. It will take much longer to recover from the vivid and searing experience. A horror story I unreservedly recommend.

My copy of this book was provided gratis by the publisher, Tramp Press.