This post is an assignment set by a history course I am currently working my way through with Futurelearn, Irish Lives in War and Revolution: Exploring Ireland’s History 1912-1923 — Trinity College Dublin.

The question set is, “Does the survival of even some social normalities alter your sense of how dramatically lives were changed or disrupted by war and revolution?” It should be answered in no more than 500 words.

In times of war and revolution death lurks in the shadows but life goes on. What is considered normal in everyday life is changing all the time. Adapting may be a challenge yet somehow people cope and always have done because they have no other choice. The majority of a country’s population have no control over whether or where trouble and violence will occur. Whatever is going on around there are still jobs to be done, meals to prepare and a day to get through. Even when living in times of increased risk, comparatively few will die as a result of a bullet or a bomb.

It does not surprise me that games of golf were played, dances attended and meetings with friends arranged as violence raged in Ireland. The disruptions such as curfews would be seen as an irritation but most would adapt albeit with varying degrees of grace.

More noticeable would be the divisions brought into focus as sides were taken. Political, religious or personal beliefs that may previously have been tolerated become betrayals when a matter of life and death for those someone knows and cares about. A choice to help or hinder a cause, to become involved, can bring with it camaraderie but also deep enmity. Those risking their lives fighting to protect or impose their beliefs expect support from family and friends. This is generally forthcoming even from those who may not previously have had much interest in the cause.

Still though, the day to day lives of most of the population will be their primary concern unless the violence affects them directly. They may discuss the war but also the weather. They are more likely to pass the time of day gossiping about friends and neighbours than about the latest goings on in parliament. War and revolution are of interest looking back when the effects may be studied, but those living through it are doing what all must do in the here and now, living their lives as best they can under circumstances that are largely beyond their control.

This post is an assignment set by a history course I am currently working my way through with Futurelearn, Irish Lives in War and Revolution: Exploring Ireland’s History 1912-1923 — Trinity College Dublin.

The question set is, “What amounts to ‘political activism’ in a period of war and revolution?” It should be answered in no more than 300 words.

Political activism can include fighting and protests but these are a means to an end. Wars are fought to try to force those who disagree to comply. War is an extreme form of bullying, undertaken by the many at the behest of the powerful.

In peacetime and in war protests are commonly used to raise awareness. They are a rallying call for the faithful, a recruiting ground for those who may not yet have been galvanised to publicly offer their support to a cause. Those who care about what others think of them will feel good being a part of a popular movement. The excitement of being seen to be at the forefront of potential change can be enticing.

Where political activism starts though is in the home amongst family and friends. This is where discussions occur and ideas are shared. Whether a person is regarded or disdained, their opinion has influence. A wish to be accepted by a group can be a powerful factor.

Political activists do not just include the impressive orators and dogged campaigners, although charismatic leaders are required. What is needed is large numbers of supporters who are willing to stand up and be counted, people with a view who will work to persuade others by whatever means they can.

War and revolution focus attention by creating suffering that all will want to end. As more minor differences are set aside in the quest for peace, activists prey on the masses emotions to ensure that their core beliefs are enshrined.

Yesterday I completed the third on line course that I have studied through FutureLearn, six weeks of finding out more about England in the time of King Richard III. The main lesson that hit home was how many aspects are recognisable and relevant today. To quote Hegel: “What experience and history teaches us is that people and governments have never learned anything from history, or acted on principles deduced from it.”

Prior to the 14th century, peasants in England were tied to a landlord through tenancy agreements that required them to maintain their dwelling and work both the land that they rented and common land. Starting at the beginning of the 14th century a series of crises, including poor harvests, murrains and famines, resulted in population stagnation and economic decline. This trend, clearly established in the early 14th century, was dramatically accelerated by the arrival of the Black Death in 1348-9. The most recent studies set the overall mortality figure as high as 50% of the population. Plague returned in the 1360s, and population remained low throughout the 14th and 15th centuries.

The great mortality of the 14th century resulted in increased demand for labour in both town and country, and a corresponding rise in wages. The government of the time made strong attempts to control this and acts were passed that tried to curb the process. Records of transgressions reveal the strategies used by the workforce to improve their situation. It is clear, for example, that workers were now resisting attempts to make them stay in the same place, or enter into contracts that committed them to fixed wages for extended periods; mobility offered much greater opportunity for improved pay, and net mobility seems to have been in favour of the towns. Peasants were clearly abandoning the ties that held them to a perpetual subservient relationship.

The wealthy often strive to depress wages for the workers they rely on for their wealth. In Britain today we have a situation where the gap between rich and poor is increasing, and successive governments are doing all that they can to maintain this. Those who wish to find a job are often required to work unwaged in order to receive the safety net of benefits which ward off starvation and homelessness. The benefits system retains a series of sanctions that force compliance; payments are withdrawn if meetings are missed or if a recipient is not deemed to be trying hard enough to abide by the rules, however nonsensical they may be. Numerous deaths have been reported amongst those who have had benefits withdrawn, the stress and hardship of the withdrawal being cited as a factor in their demise.

Even amongst the more affluent, work experience placements and internships are now a common means of gaining contacts in order to secure future employment. These can be tricky to organise, often requiring the exploitation of familial associations only available to a few. With higher education costed to ensure that it may only be afforded by the rich, or those willing to accept the lengthy restrictions of a huge debt, certain jobs have been put beyond the reach of the new peasantry.

The middle ages saw a period of improvement in the lives of the poorest which the wealthy resisted. Alongside this improvement came innovation, for example the introduction of the printing press which enabled the production of affordable books (yay!). Alongside  increased mobility, information could be disseminated more easily. With the decrease in subjugation the masses were not so easy to control, a situation which those in power feared as it threatened to disturb their own, comfortable and established lifestyles.

I am not suggesting that modern Britain is returning to the conditions of the middle ages, but I find it interesting to note the parallels. Throughout history periods of economic growth have benefited all in society with innovation and improvements in living standards, yet the powerful continue to feel threatened by such changes. Ever eager to protect their own positions they put in place barriers and controls, suppressing those who they deem lazy or undeserving, promoting only those they recognise, who agree with their personal point of view.

On a lighter note, another parallel that I noted between 14th century England and the present day was to do with food. As peasants moved to the towns to find work, landowners could no longer find or afford enough labour to work the land in the old ways. This led to an increase in keeping livestock. Broader affluence alongside changes in supply resulted in the poorer classes eating more meat, a commodity previously beyond their means. As peasants regularly placed beef, pork and mutton on their tables, the wealthy looked to differentiate their meals in other ways. Consumption of, for example, birds that were hard to catch became popular amongst the gentry looking to impress their acquaintances. Hunting was restricted and poaching policed to ensure that only the wealthy had access to certain, elite foodstuffs.

This desire to eat exotic meals that were not available to the masses reminded me of the food fads that exist today. Certain TV chefs love to promote innovation, eating combinations of ingredients that would not previously have been known about or considered. Previously unheard of ingredients become popular, fading away when too many people start to use them as standard. Quinoa anyone? 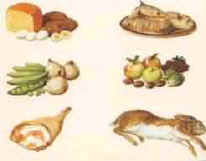