Yesterday evening I returned to the wonderful Topping and Company, an independent bookshop in Bath, to listen to the author, Sarah Winman, read from and talk about her most recent publication, ‘A Year of Marvellous Ways’ (you may read my review here). Toppings is everything a bookshop should be and I am happiest when their regular events are held in the shop itself as the atmosphere and intimacy are hard to beat.

After an enthusiastic introduction from Matt, a member of the Toppings staff, Sarah delighted us with a reading. She gave each of her characters appropriate accents, a skill perhaps learned from her years as an actress. I wasn’t the only member of the audience intrigued by the copy she used which she later explained is an original proof. How I now desire one of those for my collection! 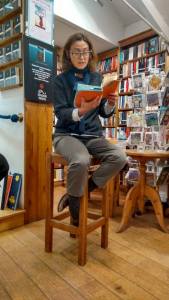 There followed a question and answer session led by Matt. Sarah was the most relaxed author I have seen at one of these evenings. She seemed to be not just at home in from of her attentive audience but to be enjoying herself.

Sarah explained that she does not plot but rather comes up with ideas which she then slots into the book she is writing. With ‘Marvellous Ways’ she first thought of the ending and then had to work out the build up. She told us that the first eighty pages were the most challenging to write.

Sarah’s prose is exquisite, sometimes magical, but her themes can be dark. She told us that she wishes to use real life situations but to write about them in the way a person remembers, thus they can at times appear surreal. This is how we cope with difficult memories, by remembering fragments of our past as stories we tell ourselves. We may embellish or choose to suppress certain details.

I was particularly interested in her knowledge of the London deep-level shelters, built during the Second World War but only opened to the public in 1944. Before this they were used by the government who did not consider it necessary to protect the working classes. The latter found shelter elsewhere, opening up places which then became known as venues for frowned upon behaviours. Freed from moral strictures people indulged illicit desires.

When bombs did find targets there would be theft from the bodies, looting from property. With the heightened awareness of how life can be suddenly cut short the war years saw a rise in pregnancy and marriage. The years following the war saw a spike in domestic violence as freedoms were curtailed and virtual strangers were forced to live together with little understanding of the stresses the other had endured. These real life situations are not how most look back on the war years. It is easier to remember how films portray bravery and stoicism, to mould reality around stories.

When questions were opened up to the audience Sarah dealt skillfully with a variety of subjects – from what secret ingredient she would offer Mary Berry (love) to whether she has aspirations to be remembered as a literary great (no). Her answer to the latter was particularly inspiring. She told us that if she attempted to write with a view to achieving literary fame she believes her wings would be clipped. She writes what she wants and relishes this freedom. I was amused when she commented that her publisher is not always given what they expect.

The evening was wrapped up with thanks and appreciation before the signing commenced. Books were proffered and Sarah took the time to chat to each eager fan. Having observed her confidence and relaxed demeanor I asked if she thought her time as an actress might have helped prepare her for such appearances. This earned me a quizzical look. She explained that she feels fortunate to have only encountered warm welcomes from her audiences which makes such meetings enjoyable. I do hope that she did not think I was suggesting she was not being herself. She came across as friendly, passionate and genuine.

When she has time, Sarah is writing what she described as a short work which she hopes to submit by the summer. From audience reaction and comments on my Twitter feed this morning I am not alone in my eagerness to read whatever story she creates next.

‘A Year of Marvellous Ways’ is published by Tinder Press and is available to buy now.

Forthcoming events at Toppings bookshop may be viewed by clicking here.

A Year of Marvellous Ways, by Sarah Winman, is a book to be savoured. The use of language is exquisite, the imagery surreal. The reader is transported to the quiet creek in which much of the story is set and can experience the magic of the place. This is a tale of people broken by grief who find healing in time, tide, and friendship.

The protagonist is eighty-nine year old Marvellous Ways who lives alone in a gypsy caravan on the shores of a remote tidal inlet in Cornwall. She has lived there for much of her life. Although age is affecting her body and her memory she feels that she has one more thing to do before her life ends, she just isn’t sure what it might be.

Francis Drake is a young soldier, scarred by the Second World War. He returns to England to fulfil a promise he made to a dying man. Before setting out on this quest he visits London and the scenes of his childhood. Here he encounters a love he had thought lost, then loses her again in circumstances that stretch him beyond what he can bear.

Marvellous finds Drake and nurses him back to health. In the process they share their stories and we learn of lives lived, loves lost and the damage inflicted by loneliness. There is happiness and regret, success and stoicism, grief and acceptance.

I particularly enjoyed the portrayal of Marvellous. We get to know her as an eccentric old lady but she has lived a long life and is more than the worn body the world now sees. She is both ordinary and extraordinary as so many people are. Strangers mock her dress and habits; Drake looked further and saw the love she had always longed to share.

The denouement mixed sadness with hope, the endings and beginnings that make up a life. This is a beautiful, satisfying read with plenty to ponder after the last page is turned.