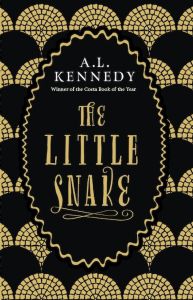 The Little Snake is written in the style of a fairy tale, although it contains no fairies. It is a story about people and the effects of the choices they make – especially on themselves. Certain place names are used but the settings are universal. Man made borders are troublesome. All cities contain those who hoard and then worry about holding on to money and possessions they will never truly need.

The tale opens in the garden of a small dwelling where a young girl, Mary, lives with her parents.

“Standing in her garden – which was on a rooftop and a bit bigger than a big tablecloth – she could look one way and see the very many sad, tiny houses of the squashed-in people. If she looked the other way, she could see the tall, sparkling buildings full of crocodiles and meadows.”

Mary is engrossed in a game when she encounters a beautiful snake. She decides to call him Lanmo. He understands how unusually clever she is and they become the best of friends. Lanmo spends time with Mary, accompanying her to school where the foolishness of the modern education system helps him understand why some people end up behaving so stupidly.

“’No’, said the teacher. “We should be proving that we are clever so that the National Test Assessors can assess us, and when we have been assessed we can move on to our next assessment.’”

Mary learns little of value at school. At playtime she is either ignored or rebuffed by the groups of “Very Attractive Friends”. When Lanmo sees how she is treated by her peers he is angered. Emotions are new to him, and challenging to deal with. He discovers that love causes pain. He starts to see people through new eyes and changes the way he behaves with some of them.

Mary reads books and then dreams of the adventures she will have when old enough to go exploring in jungles, oceans, glaciers and deserts. Lanmo’s job takes him all over the world and he cautions her about the dangers she may face. He talks of lions and bears. What will hurt her though are the actions of men.

Lanmo encounters many causes of such wickedness: the greed and thoughtless cruelty that grows alongside increases in wealth; the violence people in power invoke to maintain their positions; family members impatient for their inheritance. None of this makes a difference where Lanmo is concerned. Until he met Mary he had not cared how those he was required to visit had lived.

Lanmo returns to Mary on several occasions as she grows into a young woman. He observes how her home city becomes increasingly battle scarred and dangerous. He cannot protect her from damage and loss caused by other people’s choices which remain freely made. What he offers are continuing good dreams amidst the difficulties she must deal with.

Any Cop?: The story is deceptive in its simplicity, almost childlike yet keenly perceptive. Its message is not new but is beautifully rendered. There remains hope because each of us may choose to be kind, even if this means not adhering to the prescribed culture we live in. It is a tale for our times.