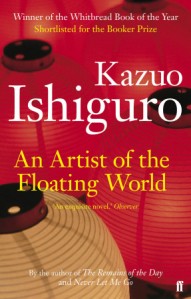 An Artist of the Floating World, by Kazuo Ishiguro, is set in Japan in the years just after the Second World War – which ended with the country’s surrender. It is narrated by Masuji Ono, a widower with two grown up daughters. His only son died in the hostilities. Resulting changes in the country are a challenge for the older generation as they watch their offspring embrace more western ideals.

Ono is a retired artist who trained with traditional painters – producing works featuring geishas and hostesses visited in the pleasure district. He and his fellow students indulged in the drink, drugs and sex on offer. He came to prominence, however, when he changed his style to support the rise of militarism. He wished to highlight the injustices wreaked by wealthy businessmen and their puppet politicians.

“In the Asian hemisphere, Japan stands like a giant amidst cripples and dwarfs. And yet we allow our people to grow more and more desperate, our little children to die of malnutrition. Meanwhile the businessmen get richer and the politicians forever make excuses and chatter. Can you imagine any of the Western powers allowing such a situation?”

Ono subsequently enjoyed influence and respect, particularly from his own students. He advised those now in power – regarded as loyal to his Imperial Majesty the Emperor. This went against the views of many of his peers who believed art should focus on beauty – not be political. Ono wished to make a difference through his work,.

“a patriotic spirit began somewhere further back, in the routine of our daily lives, in such things as where we drank and who we mixed with”

Under the new regime, traditional pleasure seeking came to be frowned upon. Changes were enforced and Ono approved.

“the new spirit of Japan was not incompatible with enjoying oneself: that is to say, there was no reason why pleasure-seeking had to go hand in hand with decadence.”

Following the war what had seemed to him a step forward for his country is viewed, particularly by the younger generation, as traitorous. The previously respected elders are blamed for sending young men to their deaths needlessly. Ono is trying to arrange a marriage for his younger daughter. He comes to believe that his prior actions could scupper her chances.

The bones of the story are Ono’s interactions with his daughters as the marriage negotiations proceed. His elder daughter is already married with a young son, her husband changed by his own war experience. Both daughters now treat their father with thinly veiled disdain. As Ono considers their interactions he thinks back on key moments in his past, his life story revealing the changes Japan has gone through over just a few decades. He went against the wishes of his parents in pursuing his career as an artist. Now his daughters are behaving in ways that do not respect him.

The rigid manners considered polite in Japanese society colour all conversations. On the surface are the endless self-effacing compliments and apologies, false laughter a device to mask criticism. Ono tries to unpick meaning from his recollections. He is an old man assessing the worth of his life’s work, ascribing value that others may not now agree with.

The author captures Japanese society in both style and substance. The tale is written to portray the nuances of interactions, the grudges held and pride felt that cannot be displayed. The changes in the pleasure district over the years reflect the changes Ono must deal with personally. Although very much a story of Japan, it is also a story of the decline of influence that comes with age.

The story is delicately wrought, fine brush strokes revealing surprising depth. There is much to think on – of societal change and aging. Although offering much to commend, the ponderous pace detracted somewhat from fully enjoying the read.

An Artist of the Floating World is published by Faber & Faber.