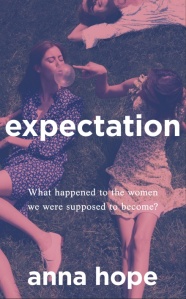 Expectation, by Anna Hope, is a book that centres on three female friends and the complexities of their lives and relationships. It offers a reality check for those who believe close friendships exist under a perpetually glowing halo.

Set mostly in the early years of the twenty-first century, the three women attend university before the introduction of tuition fees. They live together in London before rent hikes make such carefree lives in the capital the preserve of the rich. Growing up, both they and their families encourage and take pride in their burgeoning potential. The women are not so well prepared for dealing with future disappointment or perceived failure.

Cate and Hannah meet in school where they are academic rivals. Whilst Cate is accepted into Oxford, Hannah ends up at her home university in Manchester where she meets the carelessly beautiful Lissa. Lissa’s mother is an artist, former teacher and activist. In raising her daughter she wished to instil an understanding that women can have lives outside the role of parenting.

The story opens in 2004 when the three friends are sharing a shabby townhouse in London. They are all single, enjoy good food and mediocre wine, attend small gigs and gallery openings, nurse hangovers with strong coffee. They are twenty-nine years old and believe they have time to become who they are going to be.

“They do not worry about nuclear war, or interest rates, or their fertility, or the welfare state, or aging parents, or student debt.”

“Life is still malleable and full of potential. The openings to the roads not taken have not yet sealed up.”

The timeline then jumps forward six years and much has changed. Hannah – married and financially successful – is undergoing her third round of IVF. Cate has moved out of London, to Canterbury where her in-laws live. She is struggling to cope with the exhaustion of caring for a six month old child who regularly interrupts her sleep. Lissa is auditioning for a role in a play that will enable her to leave her job in a call centre. Her longed for big break as an actress remains a dream.

Moving back and forth in time, snapshots are presented of key moments in the women’s lives: first meetings; holidays and wedding days; moments of conflict. A melancholy permeates the main, linear narrative. Each of the friends looks at what the others have achieved and compares their own life unfavourably.

“why should it matter what her friends are doing? Why should her happiness be indexed to theirs? But it is.”

Hopes and love, sharply focused on a particular wedding day, fade. The paths the women’s lives have taken are not what each believes they deserve. They try to swallow the bitterness they feel, to cope with their current reality. They turn to their friends but do not find the succour they crave, which leads to resentment.

The brief portrayals of the older generation throughout the story offer wider context and understanding. It is only in rare glimpses that any of the characters can see the others as they see themselves. Parents are blamed and also envied. There is a longing for the success that was expected.

The writing is subtly evocative in its depiction of life’s challenges. The author is skilled in her use of language. The structure and flow are well balanced, although the pervasive despondency at times felt oppressive. There is a raw honesty in how the three friends regard each other and the mistakes they make.

An interesting study of varied relationships and the difficulties encountered when individual needs are not understood, acknowledged and met. Although the protagonists’ lack of contentment at times felt dispiriting, this was a poignant and candid read.

The Ballroom, by Anna Hope, is a love story set in what would have been considered a progressive mental asylum a century ago. It is a damning indictment of the innate sense of superiority still evident amongst wealthy, white skinned men, and the danger this poses to all of society. The way these men think and the power they hold over those less fortunate than themselves in terms of governance makes for familiar and chilling reading.

The story opens with the admittance to Sharston Asylum, a six hundred acre facility for the mentally deranged on the edge of the Yorkshire Moors, of a young mill worker named Ella Fay. Ella has been sectioned for causing a disturbance at her place of work, for breaking a window and then attempting to run away. Her life has been hard, not just at the mill but before that at home where her father regularly beat her mother, now dead.

Ella is assessed by the apparently affable Dr Fuller. Fuller has hopes of using music and dancing to improve his patients’ outcomes. As a member of the Eugenics Society he agrees with many of his peers that the poor are lesser beings than the wealthy. He reveres a lecturer he had at medical school named Pearson.

“During his lectures, Pearson spoke of many things, but alongside the danger of the inferior man he spoke of the superior man and of the need for these superior men to populate the world”

Many of the inmates at the asylum were admitted due to their pauperism, which Fuller believes is a fault of their genes and something that could be eradicated if they were prevented from breeding.

“pauperism is to a large extent confined to a special and degenerate class. A defective and dependent class known as the pauper class. Lack of initiative, lack of control, and the entire absence of a right perception is a far more important cause of pauperism than any of the alleged economic causes.”

At Sharston Asylum a strict policy of separation ensures that no breeding can take place. The only time any of the two thousand men and women can meet is at a weekly dance in the ornate Ballroom at the centre of the massive building. Attendance is strictly monitered and is regarded as a reward for good behaviour. Ella is determined that she will be good in the hope of one day being released.

Over on the men’s side is an Irish melancholic, John Mulligan. He and his friend, Dan Riley, are assigned jobs in the grounds where they dig graves and tend the fields. When Dr Fuller requires a subject to study for a lecture he plans to give arguing for self sufficient colonies, work camps to house the increasing number of degenerates threatening to swamp society, he picks on John. He intends to scientifically demonstrate that the regime at Sherston is a model which could benefit the inmates, the surrounding community, and society as a whole.

Ella befriends Clem, a well educated young woman from a wealthy family who pay for her incarceration in an attempt to persuade her to conform. Fuller concurs with the widely held opinion that men and women are inherently different, that men are naturally inclined to progressive thought whereas women are born to nurture. When Clem refused the suitor chosen by her father and brother, desiring instead to attend university, they considered her behaviour hysterical and requiring treatment.

Ella and John meet at the weekly dances. They exchange letters, which Clem reads and writes due to Ella’s illiteracy. The drudgery of their days is lightened by the feelings kindled. It is exactly the sort of behaviour that Dr Fuller is determined must be stamped out if the expense to the state of pauperism is to be eradicated.

The writing evokes the hard life of the inmates: the heat, smell, discomfort and boredom that must be tolerated alongside the knowledge that all power of self determination has been removed. If they were not mad to begin with it takes great effort to prevent madness developing in these circumstances. The inhumanity of the staff is painful to read. Above all of this sit the doctors meting out what they see as benevolence. They have no idea how their patients think and feel because they cannot perceive of them as equals.

A powerful, satisfying read that is a chilling reminder of the need to rebel against the lies peddled by government of the inferiority of certain classes of people. Our Eton educated overlords are still being raised to consider themselves superior types of being, and to persuade those beneath them of the need to eradicate the poor by whatever means.

This is also a love story of the first order. I was rooting for Ella and John throughout, despairing over Clem’s circumstances. Beautifully written, emotive, and all too relevant today.